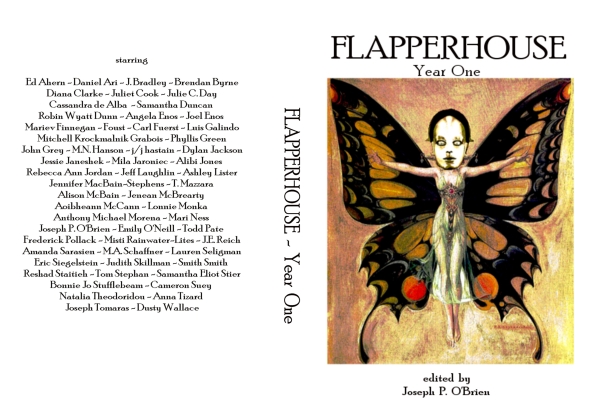 As 2014 has been careening through its homestretch, our Flappers have been even more prolific than usual, getting their work published across the internet like there won’t be a 2015.

Jeff Laughlin shared some things he’s learned this year in “The Year I Didn’t Belong” over at Triad City Beat.

Dusty Wallace’s “Flight of the Lonely” went up at Acidic Fiction.

Samantha Eliot Stier’s “Plugs” was inserted into The Writing Disorder.

Juliet Cook & j/j hastain collaborated on “Clots Push Over the Edge” for the latest issue of Stirring.

Alison McBain’s playfully absurd “Nothing For Sale” was featured at Saturday Night Reader.

Emily O’Neill’s poem “Proof” was included in the latest edition of Sundog Lit.

Natalia Theodoridou’s “The Ravens’ Sister” perched itself at The Kenyon Review Online.

Bonnie Jo Stufflebeam’s “Sleepers” went up at Fantastic Stories of the Imagination.

These past few weeks, our Flappers have been killing it all over the web with their literary weaponry:

Joseph Tomaras spoke with Nick Mamatas about Joseph’s story “Thirty-Eight Observations on the Nature of the Self,” which is featured in the Phantasm Japan anthology.

Jeff Laughlin mused about sports on the radio for Triad City Beat.

J. Bradley recorded a reading of “A Love Poem as Written by Robert Rodriguez,” included in the first issue of  Profane.

Holy Smoke! Our Flappers have been mighty prolific outside the Flapperhouse these past few weeks…

Natalia Theodoridou has had a couple short stories published recently:“Wayward Sons” in Lakeside Circus and “That Tear Problem” at Kasma.

At Split Rock Review, Emily O’Neill has a poem partly inspired by the fantastic show Supernatural titled “Disguises for the Waxing Moon.”

Todd Pate blogged about his new gig with the North Dakota Museum of Art at El Jamberoo.

Aoibheann McCann’s “Premium Line” ran in issue 2 of The Incubator.

Rebecca Ann Jordan’s “Gospel Of” was published in Infinite Science Fiction One.

Jeff Laughlin wrote on the loneliness of tennis in covering the Winston-Salem Open for Triad City Beat.

J.E. Reich wrote about how “We Never Notice Our Own Addictions” over at Medium.

Diana Clarke reviewed the documentary Kabbalah Me for the The Village Voice.

Bonnie Jo Stufflebeam’s “Tea With the Titans” appeared on NewMyths.com.

Some places around the internet where our Flappers have been flapping as of late:

In episode 4 of Scared Yet?, Kris Straub praised the polish, restraint, and unreliable narrators in Cameron Suey‘s horror & dark fantasy stories. And in S4E03 of the NoSleep Podcast,  Jeff Clement and Derek Jensen performed a reading of Cameron’s “Dust.”

Our favorite hobo journalist Todd Pate recounted his drive from Hollywood to North Dakota in his latest post for El Jamberoo.

fwriction : review has been displaying “London, 1973,” an excerpt from J.E. Reich‘s novel-in-progress To Build A New World.

Bonnie Jo Stufflebeam has two more stories out there: “The Foster Child” at Expanded Horizons and “The Hoof Situation” at Scigentasy.

Here are some writings our beloved Flappers have posted & published around the internet in the past couple weeks:

J. Bradley responded to SCOTUS’ Hobby Lobby decision with his poem “Where the White People Are: Women’s Reproductive Rights” at The New Verse News.

Mila Jaroniec recounted her “Brief History of Blackouts” in an essay for Medium.

Jeff Laughlin coped with a metaphysical hangover in his Hunter S. Thompson-esque “A Night Without Peace at Bowman Gray” over at Triad City Beat.

J.E. Reich‘s “Breakers” (from our current issue) was read aloud on last week’s broadcast of Mr. Bear’s Violet Hour Saloon, and it was also reposted at Medium under the title “Teasing it Open.”

Rebecca Ann Jordan‘s magical realist tale “This Is No Garden” was recently published at Swamp Biscuits and Tea.

Tom Stephan posted the very creepy “A Summertime Tale” last week. We’re not sure if it’s a true story or not, and we’re too scared to ask him for the answer. 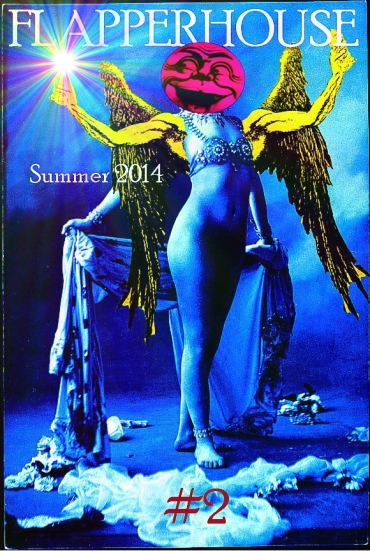 Digital copies of our Summer 2014 Issue will drop on June 20, but you can pre-order one right now for just $3 US. One of the very flappy lits featured in our 2nd issue is Bonnie Jo Stufflebeam‘s “Scars,” a surreal flash fiction seemingly spawned from the hazy hinterlands between dream and insanity…

NATALIE DIDN’T KNOW WHERE THE MUSICIANS CAME FROM. When she woke from an ill-advised three-hour nap they were there in her spotless living room, their instruments strung out like her old college friends all over the brown plush carpet.

The empty carcasses of their instrument cases confused her. She stepped around them. She did not ask the musicians why they were there, but she did think it odd that they were not playing. Their instruments looked lonely leaning against her dusty elliptical, her empty bookcase – she had sold her books for cash at the local bookstore – her coffee table with the missing leg. As she stood in the kitchen door, which looked out at the living room, and shoveled peanut butter granola down her throat, she catalogued the instruments: one thick upright bass, one legless Casio keyboard, one worn acoustic guitar with a blue stripe down its middle, one tarnished brass trumpet, and one silver saxophone relaxing awkwardly on the couch beside a man whose dark fingers strangled its neck.

She looked, blurred by a nappy haze, from musician to musician, cataloguing them too, trying to place each man to his instrument. And they were all men, she realized with a start, five strange men in her home.

The one attached to the saxophone had dreadlocks to his hips, thick and black and beaded, a squarish face; beside him a thin man with two scars on his lips the shape of a trumpet mouthpiece sat with his legs crossed at the upper thigh; a rounder, cleaner man with the upright’s curved silhouette stood in the door to the study, his hands pressed against the frame as if blocking her escape, though the exit to the hallway was clear, thus that couldn’t have been his intent; a Hispanic man crouched behind her lazy boy, his hands poised across its back like a piano. The guitar player with shaggy brown hair covering one eye and black tape wrapped around each finger she didn’t have to guess at.