From our Spring 2016 issue, “Likenesses” is Leona Godin‘s touching tale of love & life after death, inspired by her own family history. In the video above you can hear Leona read the story, and you can even see some of the old photos referenced in the text. You can also hear Leona read from this story and chat with Ilana Masad in episode 63 of “The Other Stories” podcast!

WHEN THEY FOUND LEONA’S BODY it was curled about an old grey cat, also curled and stiff. The funeral director’s assistant (who did all the dirty work with the fluids and convex plastics to keep skin from sagging, while the funeral director—the artist, he called himself—fussed with lipstick and wigs and hands folded just right) said he’d never had such a hard time prying two bodies apart, said he’d almost given up and buried them together, “but of course one can’t find a casket shaped like that.” He was telling his cronies at the bar after work and they all laughed to hear how the cat’s stiff paws would not let go of the human hand. “The thing that gets me is how they must have died at the same damn time,” he said and drank his whiskey dry. “That’s some crazy bond.”

Mama was born Katherina Wiget, of the original Canton Schwyz Wigets who boasted a family crest of gold wheat on a field of blue. If she had been a joyous child, nobody in America knew, for her unhappiness blossomed with her youth when she was unceremoniously shipped off to distant relatives after her father married a younger woman to replace her dead mother (the young wife having no use for her predecessor’s children). At age twenty, Mama found herself working as a seamstress in St. Louis, where she met Albert Beynon, another Swiss, but from the other side. He spoke no German and she no French. Their common language was their adopted tongue of English.

A young and charming rake, whom the Americans called Frenchie, Papa worked as a mechanic on the ford Model T for much of Leona’s childhood, first in St. Louis and then in San Francisco. Not the factory type, Papa managed always to steer clear of the assembly line, working independently as a mechanic who fixed cars for the youngsters who’d grown up wanting them, not making them. Having apprenticed in Geneva in the early days of the internal combustion engine, he was a tinkerer at heart. If he had not the temperament nor genius nor entrepreneurial spirit of a Ford or a Benz, he shared with them a great facility for putting things together and taking them apart, as well as a soft spot for the new and ingenious which found expression in his trade of mechanics and his hobby of photography.

In Leona’s photograph of them, Mama dwarfs Papa, whose head is nearly level with (and not quite as big as) her enormous breasts. Dressed in calico, she seems painfully aware of how ludicrous they must appear in the eyes of posterity and hence refuses to meet our gaze. She stares off camera and away from her husband. For his own part, Papa adored posing for pictures almost as much as he loved taking them. Hence he looks directly into the camera, seeming almost to delight in his new wife’s embarrassment. The result is a portrait of a couple whose eyes’ trajectories form an acute angle, symbolic of their married life.

Papa left on his first solo sojourn when Leona was thirteen. She cherished the photograph he sent back in which a swashbuckling Papa wearing tilted hat and lace-up boots is surrounded by otherworldly trees with knotted flowered arms that stretch to the sky, on the back of which he wrote, “6 November, 1923, Mojave Desert Love Papa.” Leona felt not the least resentment towards him for leaving (Mama felt enough for the two of them) and rather admired the rugged jauntiness of his likeness, as well as the cleverness of the timer-camera and the hand-built automobile, which, though they did not make it into the frame, add greatly to the charming picture of independence.

As the ‘20’s roared along, Papa spent less and less time in San Francisco, so that when the Crash of ’29 hit, his absence was more fixed than his presence. The sporadic letters wrapped around small bundles of cash had also grown scarce then vanished altogether, but by then Leona was a woman. She took jobs cleaning Nob Hill houses to help support the family, which also included her little brother Arthur who, being eight years her junior, was almost more son than brother.

Mama had a tyrannical disposition which, if it were not for Leona’s being her equal as a workhorse on the one hand and impervious to black moods on the other, would have made the double-mother household unbearable. As it was, the two balanced each other out, and raised Arthur with much discipline and coddling respectively. Arthur rewarded their ministrations by being the first in their family and their acquaintances to go to university. Good at math and eager to travel the world like Papa, Arthur studied mining, a subject which had, since the Gold Rush days, become a marvel of science and engineering, while it maintained its adventuring mystique. END_OF_DOCUMENT_TOKEN_TO_BE_REPLACED

In case you missed our 6th reading— or if you didn’t miss it but would like to relive the experience in podcast form– you may now stream or download it through the Soundcloud file below! 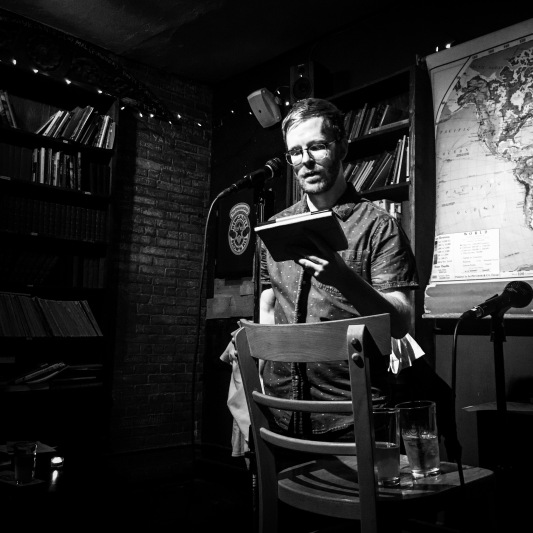 We’re gonna sparkle & boogie as we celebrate the flight of our 9th issue with our 6th reading on Wednesday, March 23rd from 7 – 9 PM at Pacific Standard (82 Fourth Avenue in Brooklyn).

Starring FLAPPERHOUSE #9 contributors LEONA GODIN, STEPHEN LANGLOIS, WILLIAM LESSARD , and CHRISTINA M. RAU ; our fiction editor T. MAZZARA will read from his novel-in-progress; featured poet of FLAPPERHOUSE #8 & Reading #5 JOANNA C. VALENTE returns; as always, chanteuse extraordinaire ALIBI JONES will treat us to a song or two; and all the way from Tel Aviv, ANTHONY MICHAEL MORENA will read from his forthcoming book THE VOYAGER RECORD (Rose Metal Press, May 2016)– featuring a special appearance by the late CARL SAGAN!

Pre-order a DIGITAL (PDF) copy for $3US and watch it fly into your emailbox
by the Vernal Equinox!

Dr. M Leona Godin puts a comically megalomaniacal spin on the history of braille in “The Awl,” one of the many flappy lits you can find in our Summer 2015 issue (available online via Amazon and Createspace, or at independent brick-and-mortar stores like Bluestockings and St. Mark’s Bookshop).

I HAVE HEARD OF THE DEATH OF MARAT. Marat was, they say, dotted with ugly holes in his skin that oozed and gave pain. He only found relief in the bath, so that is where he stayed. With his writing table hovering above the surface of the water, he took the names of traitors and wrote them on his Guillotine list. He was stabbed by Mademoiselle Corday, a girl who hoped to stop the madness. David, ever the sycophantic whore of the revolution, bathed the scene in a holy light, forever casting the mastermind of the REIGN OF TERROR a martyr in the gullible eye of the viewer. Once again, the eye deceives the mind!

Now my professors paint me a rebel because I dare to teach a writing system that works better than that of poor old father Haüy. So much for progress. These petty pedants wouldn’t recognize progress if it bumped them on the back of their heads. Ha, bumps, that’s what we’re talking about! You would have laughed to see me point at them in my tribunal and say, “You are all no better than a lot of Oedipuses and I, like Tiresias, warn you to reconsider your folly!” They did not like that at all. Not at all. Sighted people have very fragile egos!

How can they not see that nothing man creates is perfect? Fine tuning—even the most magnificent instrument—is always possible. Consider the organ. With each new great one built, the air pumps more efficiently, the levers glide more smoothly and the stops are placed ever more precisely. There is something divine in progress. Perhaps even God is a tinkerer? One could wish for some improvements. Hear me Lord, my suggestion for the next version of Man: please make the eyeball a little less delicate. It seems a very important organ to be so vulnerable. Or else make us humans less clumsy…

My father was a saddler,
A sad saddler was he,
For I, his little boy,
Would be a saddler too.
Sitting at my father’s bench,
I took the awl in hand,
The awl missed its mark
And found my eye!

END_OF_DOCUMENT_TOKEN_TO_BE_REPLACED

A thousand sultry thank yous to everyone who helped make last night so memorable: Jeff, Bud, Ned, Kailey, Stephen, and Leona for performing your flappy lits; Alibi Jones for your exquisite singing; Pacific Standard for providing the space & sustenance; and of course all you beautiful people who attended. Let’s do this again in the Fall…

Thursday, June 25, we return to Brooklyn’s Pacific Standard to celebrate the flight of our Summer 2015 issue with our 3rd reading. It’s gonna flap your face back to the Stone Age, and then to the Jazz Age, before finally dropping you into the Space Age so you can sleep it off at some dingy interplanetary motel. 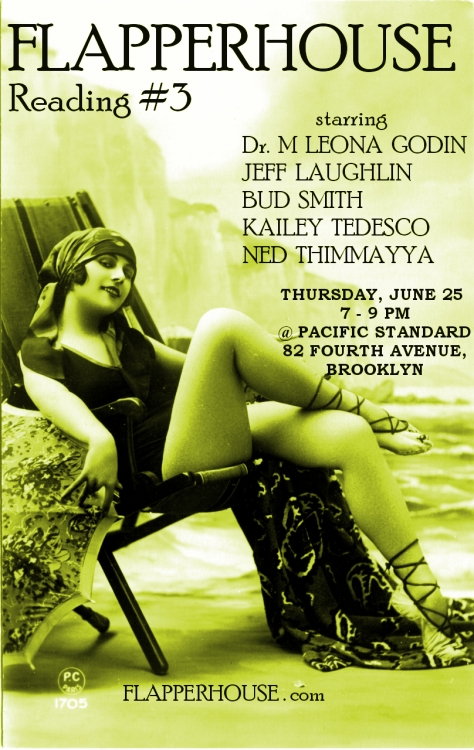