A couple fights to survive through their dystopian world of mutant rats & hyper-surveillance in “On the Backs of Cats,” Kathryn McMahon‘s fantastically frenetic flash fiction from our Fall 2018 issue.

MY BOYFRIEND HAS A CAT NAMED KALASHNIKOV and the three of us go hunting at midnight. He brings his taser, I bring my magic whistle. Kalashnikov listens for the unique squeaks of rats with human ears growing out of their spines. Grenadine-pink test subjects that escaped during The Spills and roam the alleys eavesdropping on every conversation.

To pay rent, we sell the ears to collectors. What they do with them, no one knows. Ear-bearing rats are squishy, naked things, and I feel bad killing them. I tell my boyfriend this every night before we head out.

He has a glass eye that he records me with. I think he records his bar fights too because for him, routine is not enough. When we go to the pub through the crack in the museum wall, we hold hands by rotting dromedary bones and watch combinations of couples and talk about who in each pair would be better in bed. We never ask them to join us, though our lust is harmonic.

At home, I dance for him. He records me then too. It is exothermal, watching him watch me. But does he play back the audio, not just what I do with my hands? “I said I like that it’s only us. Are you listening?”

Before we go hunting, he shuts off the lights, draws the curtains, and it’s his turn to dance. So beautiful, rough-edged and pale. Taking off his clothes, he pumps up the music pissing out of the ham radio and holds it over the shelves of ears waiting to be sold, white and brown and black. So many extra ears, but for whom? My boyfriend claims the rats were released intentionally. He says the government is always listening, but I’m not convinced.

I lean back on our half-torn mattress. “Just because the ears are full of silicone wires, it doesn’t mean they care what they hear.”

His rollie is crisp red in the shadows, and he blows smoke away from me. “Oh, they care.”

“What, about how much we fuck?”

“You have theories about everything.” My boyfriend is an inventor and sometimes I wonder if I am another invention. A cog. A circuit. After all, he forgets I was the one who cobbled together the rat whistle.

“What’s mine is yours,” he says, gyrating and squeezing the curve of my belly.

In the alley, I puff on cold fingers and wave to the roof camera trained on us this lonely dark night. He might not be wrong about them. Why watch us if they don’t care? Why listen if they think we have nothing to say? I grasp the whistle around my neck, warming it so it shrills at the right pitch. I press it to my lips, hear nothing, but know better.

Kalashnikov meows, twirling between my boyfriend’s legs, so he takes the taser and rubs it over him, charging it on the cat’s static fur. He loves strays and took Kalashnikov in as a kitten. I wasn’t so sure. Now he wants children. This is where everything falls apart. Where we divide from a hand-holding unit.

A rat lopes away from a pile of trash. The cat hisses, my boyfriend zaps. Sizzle, pop. Kalashnikov pounces, tears the ear loose, and drops it on my boot. I stroke his nose and pocket the soft lobe in my aluminum-lined dungarees—in case anyone really is listening.

The alley is quiet; the air, calm, but freezing. I whistle to lure more rats to us and Kalashnikov’s hungry claws. Like sewers at high tide, their livers can burst with the full moon, but the cat isn’t bothered; I am. Lately, my boyfriend and I don’t argue, even about kids. I have my habits, too, though, and need an answer to all the big questions. In the chill, I do what I can to picture our dancing. I cannot picture teaching a child to whistle for rats or charge guns on the backs of cats.

“It isn’t their fault they were born into ulterior motives. I don’t like what we do. I don’t like the why, nor the not knowing why. I want to believe that it’s mercy.”

Does he need his own listening device; a translator? He adjusts his glass eye and I wonder if I am sleeping with the enemy. Watching being watched but not being seen.

A surge of ears comes tittering around the corner.

I try not to look when he shoots, and I don’t think he’s looking, either, as rats pipe up my legs and blue lightning threads past me. Maybe he doesn’t know where to look. Rats scatter. Kalashnikov purrs after the corpses while I scoop raw helix cartilage and feeble wire into my pockets.

A rat leaps between the alley walls, the ear a fat fin on its back. My boyfriend aims true and the ear flies off.

I catch it mid-air.

I should give him the whistle and be done with it. Or keep it and steal the rats away from here. Cradle them and trade my whispers for small squeaks. Leave him wondering what it is to listen. 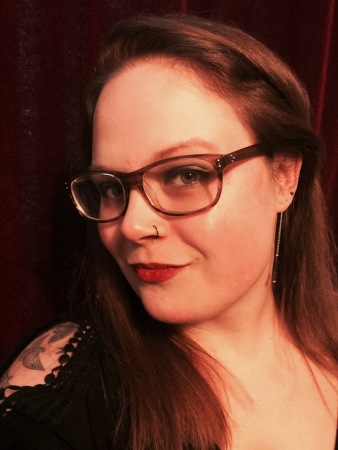 KATHRYN McMAHON is an American writer living abroad with her British wife and dog. Her stories have appeared or are forthcoming in Booth, Passages North, Podcastle, The Cincinnati Review, The Baltimore Review, Jellyfish Review, Split Lip, and others. She is a finalist for the SmokeLong Quarterly Award for Flash Fiction. Her work has also received nominations for Best Small Fictions, Best of the Net, and the Pushcart, and has been selected for Wigleaf’s Top 50. On Twitter, she is @katoscope. Find more of her writing at darkandsparklystories.com.