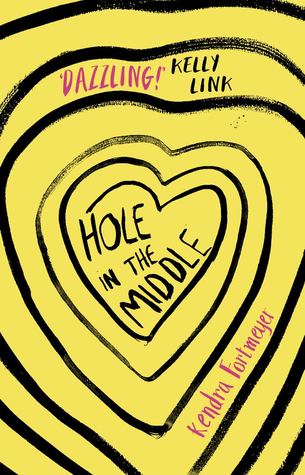 Author Kendra Fortmeyer speaks with our senior editorial consultant Maria Pinto about the process of writing her first novel, HOLE IN THE MIDDLE (now available for pre-order on amazon.co.uk), as well as discovering her characters, turning walls into springboards, and wanting to backup-dance for Of Montreal.

MP: Your debut novel, Hole in the Middle, comes out with Little, Brown this summer. Congrats, congrats, a million times congrats! I hear you were at Clarion, the premiere science fiction and fantasy workshop in the country, when you got the news of its pending publication. Describe the first 24 hours after that fateful phone call/ email/ however these things are communicated.

KF: A secret: I knew about the sale quite a long time before Clarion! It became finalized right just before I was accepted to the workshop, but I couldn’t tell anybody. A second (less secret) secret: publishing is (99% of the time) a painfully glacial industry, at least from the author side. Agents have enormous piles of manuscripts on their desks, as do editors; contracts can take months to negotiate; announcements of sales are, themselves, carefully calculated and timed so that your book will receive the most attention possible. So the disappointing answer, in short, is that I’d known about the sale for months but had to Keep It A Secret, because according to mystical publishing algorithms, announcing the sale was most advantageous in July. This can be quite difficult, especially when you’ve poured your heart and soul into a project and presented it trembling to the world, but at the end of the day, soul-trembling or not, publishing is a business (that does, hopefully, present the soul-trembling product of your heart to the world in the best possible light; my agent and editor are brilliant and I would never doubt them).

But! In those 24 hours after the announcement, my beautiful Clarion classmates threw me a surprise doughnut party, because they are the best humans, and I will never stop telling the world so.

MP: What were some things that surprised you about the writing of this book?

KF: Hole in the Middle is my first novel, and so the whole thing was a learning experience. I was most surprised by two things: the first was the point when I couldn’t hold the entire story in my head anymore. As a short story writer, I’d always had an intimate knowledge of my work: where, exactly, certain conversations fell on a page, which language had been used already and which hadn’t. Trying to conceive of an entire novel at once was like trying to carry an armload of spaghetti up the stairs—it’s a bigger and more daunting and slippery experience.

The second is how a novel grows and changes over the course of its writing, and by necessity: when you write a flash fiction in one sitting, it is of a single time and place, and a single instance of yourself. I drafted this novel over the course of a year, during which I was every season of myself. It took a greater deal of editing than I anticipated (in a much more compressed time) to bring the book in line with itself. END_OF_DOCUMENT_TOKEN_TO_BE_REPLACED

Dear Readers, you may remember E.L. Siegelstein ( @ericsiegs ) as the author of 3 of the most spectacularly flappy stories we ever published ("Ghost-Sick Jarvis," "A Bullet for Mr. Sweet," and " The Trump Wedding"). He's also the author of an even more spectacularly flappy novel, LOVEBITES & SUNGUNS, which is now available on Amazon for a real good price.
A few weeks ago I got a DM from the editor of this new zine, whom I'd never met and, aside from a brief personal decline I sent in response to a story he submitted to FLAPPERHOUSE many months ago, had not corresponded with before. His message said some very nice things about FLAPPERHOUSE, and he offered to send me a copy of this zine he started called EXCUSE ME. I finally read it & was delighted to see how it's keeping the spirit of weird, irreverent lit alive-- plus I was surprised & tickled to read a special shout-out in the issue's intro. Anyway if you still miss FLAPPERHOUSE you may want to check out EXCUSE ME. Find them on twitter @MagExcuse
Our managing editor @josephpob gives one last once-over to our Year Five anthology before it flies on 10/31
Our Year Five anthology, containing all four issues from our final year, will fly at last on October 31.
Four years ago today was a very special reading. We launched our 7th issue with a stellar lineup of readers (including the late F. Scott Fitzgerald, our first ever dead writer guest). We also had one of our biggest & best crowds for this one, including a few people seeing us for the first time-- Stephen Langlois, Ron Kolm, and Shawn Frazier-- who'd go on to become beloved members of the Flapperhouse family
Three years ago today, we went back to school with a vengeance & got in trouble with all these fierce writers for our 10th reading
The poster for our very 1st reading, which occurred exactly 5 years ago today
Print copies of our last issue finally arrived to FLAPPERHOUSE HQ, and our managing editor @josephpob is highly delighted. Anyone who is due to receive a copy of this baby from us should have it in their paws within the next week. We apologize for any inconvenience or delayed gratification.
Flappy New Year, everyone!