Behold the shimmering dread & terrible beauty of “So, the Portal to Another Dimension is Not in the Hudson,” one of three terrific poems by Chris Antzoulis in our Fall 2017 issue. (And be sure to check out the recording of Chris reading his poem below~)

IN TIMES OF DISTRESS
I look to the water.
Today it’s the Hudson.
I was hoping for fog
and all I got was the sun
rolling diamonds
down river like roulette balls.
And I could see my reflection, a specter
atop the glitz and shimmer.

He walked
toward me as he started
devouring
his own arm,     took a chunk right out
from behind the elbow—
the part that heats up
when someone asks
you to hold them tighter.

He kept taking bites
until his arm was gone.

Now, in front of me
with his head swiveled in a way
that only a dead thing could

I watched, red-eyed in terrible
beauty,
as he sunk his teeth into his shoulder,
wondered if I was supposed
to be watching.

The sun whipped the smell
of breathing
off the gems of the Hudson
as I lunged into its riches.

An orchard-ful of apple-flavored thank-you’s to everyone who helped make last night’s reading so warm and crackly and a little bit dangerous, like an early-Autumn fire: Matt, Amanda, Hafizah, Chris, Mary Boo, and Kim for performing your flappy lits; Alibi for your scintillating singing & gorgeous photography; Pacific Standard for your always-gracious hospitality; and all you beautiful & cultured people who came to witness the weirdness…

We hope we’ll see you all again on 10/25 for our 2nd Annual Halloween Reading! 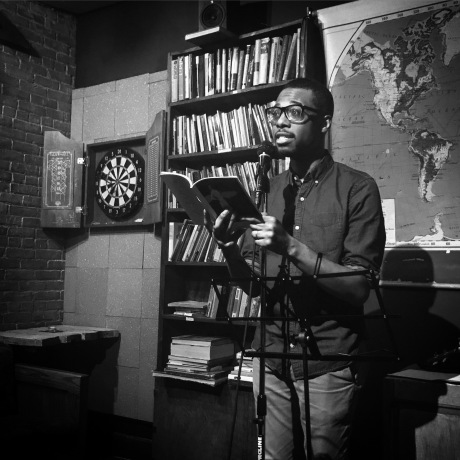 Hafizah Geter wows the crowd with her poignant and powerful poetry

END_OF_DOCUMENT_TOKEN_TO_BE_REPLACED

Our engines’ll be running hotter than a boiling kettle as we celebrate the flight of our Fall 2017 issue with our 17th reading! Wednesday night, September 27, 7-9 PM at the always-hospitable Pacific Standard, 82 Fourth Avenue in Brooklyn.

Admission is FREE, and you can buy copies of FLAPPERHOUSE #15 for the special reading price of $5.