Behold the shimmering dread & terrible beauty of “So, the Portal to Another Dimension is Not in the Hudson,” one of three terrific poems by Chris Antzoulis in our Fall 2017 issue. (And be sure to check out the recording of Chris reading his poem below~)

IN TIMES OF DISTRESS
I look to the water.
Today it’s the Hudson.
I was hoping for fog
and all I got was the sun
rolling diamonds
down river like roulette balls.
And I could see my reflection, a specter
atop the glitz and shimmer.

He walked
toward me as he started
devouring
his own arm,     took a chunk right out
from behind the elbow—
the part that heats up
when someone asks
you to hold them tighter.

He kept taking bites
until his arm was gone.

Now, in front of me
with his head swiveled in a way
that only a dead thing could

I watched, red-eyed in terrible
beauty,
as he sunk his teeth into his shoulder,
wondered if I was supposed
to be watching.

The sun whipped the smell
of breathing
off the gems of the Hudson
as I lunged into its riches. 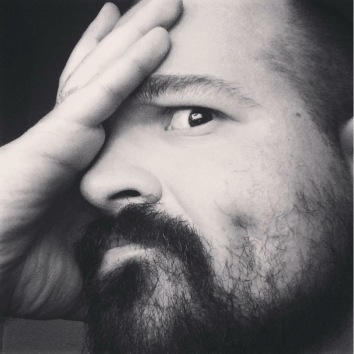 CHRIS ANTZOULIS is a New York-based poet and comic book writer with an MFA in writing from Sarah Lawrence College. His poetry has appeared in Yes Poetry, Newtown Literary, decomP magazinE, and Cowbird. He has also helped other writers reach audiences through his work with literary magazines such as Madcap Review and Lumina. He currently lives in Queens, NY with his two evil cats and teaches creative writing at Mercy College in Dobbs Ferry, NY.