With a new year ahead of us, let’s look back at the 10 pieces that attracted the most eyeballs to our site in 2018…

6. “Too Late for Anarchy,” Marc Harshman’s wry and wistful poem from our Summer 2018 issue.

3. “Questionnaire for the Gravitron Operator Before I Ride,” Jennifer Savran Kelly’s curious & captivating flash fiction from our Fall 2018 issue.

And our number one most-viewed piece of 2018 was “Snapshot from the Revolution,” Perry Lopez’s historical & horrific short story from our Summer 2018 issue. 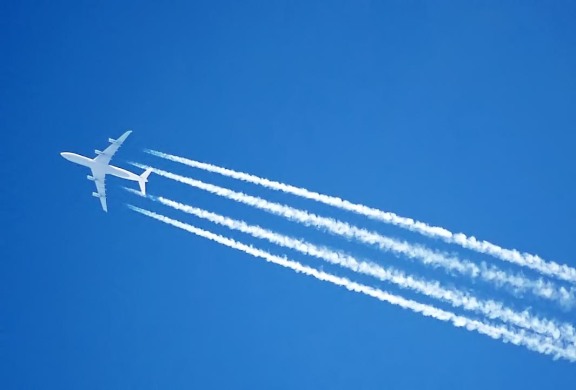 A frustrated husband and his paranoid wife try to cope with their realities in “Chemtrail Mist of the New World,” C.D. Frelinghuysen‘s paranoid & poignant flash fiction from our Fall 2018 issue.

MORNINGS BERNADINE HAUNTS THE PORCH.  She glides back and forth, white hair untethered, clutching the egg timer, glaring at the sky. “I dare you,” she tells it, as if we don’t live under the Atlanta flightpath. Right on time, Delta 49 appears from the northwest, slicing the sky with a white wake. Bernadine mutters and winds the timer to five. Ever since the Doctor cut her to half time for unprofessionalism she’s been able to perfect the details of her delusions. And after Bernadine squandered our savings I’ve had to unretire from my fine decade of alcohol abuse and represent morons at traffic court, but business is slow and so most mornings I’m stuck here with her.

Last summer at a minor league game Bernadine got beaned by a foul ball, knocking her into the next seat. She was out for a full minute, but when she came to she waved off the paramedics and pushed through the crowd to the parking lot. She grabbed the car keys and drove home, but took a strange route, and kept looking in the rearview. When we got in the house she had a whiskey and a Tylenol and went to sleep. At three a.m. she suddenly woke and shuffled into Tricia’s vacant bedroom, which we’d turned into storage, and booted up the dusty computer. She spends most of each day in there now. I’d heard of a man who dove headfirst into the shallow end and could play piano afterwards. Bernadine, during her brief time in the void, had mastered keyboard and mouse. I caught the ball off the rebound, by the way. Bernadine called it the instrument of her trepanation, and had it mounted above the fireplace. But the baseball was only the final straw that broke her. Lightning ignites dead woods, not the living.

It’s her fault I know every plane by its name, how many engines move it, every federal poison it belches, and why five minutes of linger tells you what sort of smoke is coming out.

Yesterday I had to coax her down from a box in front of Chase Bank, where she was denouncing the fraud of fiat currency. The police officer didn’t scold me, or laugh. He just wrote down the phone number for Braxbury Convalescent.

The timer erupts. Bernadine measures the sky, clicks her tongue, goes inside and shuts all the windows, despite the heat. She clomps down the basement steps and I hurl my spent smoke into the yard. She comes out wearing her gas mask, no longer a ghost but an olive drab and dumpy elephant. “Looks like arsenic today,” she gasps. The Brauns are watching from their window.