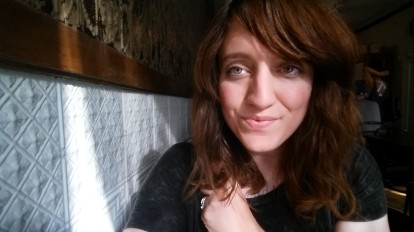 Shannon Moore Shepherd is the author of “Creature Feature: Caligynachtmare: Dread the Beauty,” a fantastically fierce poem from our 7th issue which we nominated for Best of the Net this past September. Shannon is also a musician, a master eavesdropper, a sloppy but intuitive tarot reader, and a fearless insect photographer. She studied Creative Writing at Bradley University and is working on a Gothic homage to her hometown of Peoria, Illinois. In her recent interview with our senior editorial consultant Maria Pinto, Shannon talked about her poetry, as well as feminine beauty, writing voice vs. speaking voice, and the romance of nauseous anticipation…

{ X }
MP: First, let’s discuss the title of your stunning, Best of the Net-nominated poem, “Creature Feature: Caligynachtmare: Dread the Beauty” which opened FLAPPERHOUSE #7. How did you know it had to be a three-parter? How dope is Caligynachtmare as a coinage? Did the title come before during or after you wrote the final draft?
SMS: It came after. This poem came, as it says, from very far away. The entity came into focus slowly. I didn’t know what to call her, so I made up a hybrid of caligynyphobia (fear of beautiful women) and Nachtmahr, German for “nightmare.” In folklore, the mare (who came dans nacht) was commonly gendered female and said to ride things. All kinds of things. She was evidently very restless. I wanted her to ride in from across the galaxy, which brought to mind vintage sci-fi. So she gets her own Creature Feature, entitled Dread the Beauty. That’s how the three parter came to be. Really, I just couldn’t bear to choose one or the other.
MP: If the “I” in the poem is loud and clear with its moon-sickness and dark promises, the “you” is wonderfully meek. Where did these two subjects come from?
SMS: So, the “you” is always a little tricky, right? I’ll admit, for me it always starts out a real flesh and blood human with whom I have an ax to grind spiritually or intellectually or romantically but can’t really do so inside my own body. That person or those couple of individuals get dragged off to my poetry den to meet their fate there. But I have to say, this you, in the end, looked more like… well: MRAs to conservative politicians to priests to good-old-boys. The irritating little power struggle I was experiencing with one human at that particular time was suddenly a since-the-beginning-of-time kind of thing.
MP: One way I read this poem is as a corrective to the glossy, static photo of a beautiful woman in a fashion magazine with an arrow pointing to her eyes nose and mouth and notes about what brand of lipstick and foundation and mascara she’s wearing floating around her head. Was it your intention with this piece to re-mystify feminine beauty, to reclaim its dangerous, ineffable properties?
SMS: Yea, it’s really cute how we’ve gotten the hang of making “beautiful women” something benign, tame, palatable, pleasant. Can you imagine asking Hecate to turn her chin just a little to the left? She’d crush your esophagus. Could you imagine the guy sitting next to you on the subway opening an issue of Maxim and finding the true likeness of Lilith staring back at him? He’d stroke out. We all have an inkling that the examples of the feminine we’re given to this day are weak, watered down, incomplete at best. Occult aesthetic is going mainstream so that’s neat and everything, but thousands of years of trying not to be scary, powerful beings so that little boys don’t piss themselves really can’t be remedied by haut witch collections of 2017. This being is manifested directly from male fear. And she’s insanely gorgeous. Blindingly so, if you ask me.