I OPENED NOVEMBER WITH TREMBLING HANDS, much in the way one hesitates to pitch a lobster into a boiling pot. The knowledge that I had killed something as simple as time was devastating to me, a person conceived from a petri dish, and I was aching with discord—the delicacy, the resiliency! This month belonged to me and I yearned to watch it spoil.

While France reinstated the guillotine as its method of judicial execution, I shed myself of time and its earthly contingencies. In retaliation, my body began to rot, as though it no longer possessed the faculties to operate without a future. Time, I told it, swore us to grief. My body humbled me. I punished it accordingly. Thousands of miles away, some poor fool hurled a Christmas ornament through the president’s window, and a missile that would eventually destroy humanity was launched into space.

As I lay decaying in bed, I turned to face my lover, who had been dead since the inaugural meteor, and asked whether discipline was a consequence of time: “Do we not fear penance in its relation to temporal length? And which is worse—the loss of time, a construction intended to commodify the lived experience, or the prolonging of one’s misery for sport?”

My lover, or a permutation of such, rose from the grave and bruised my jaw with ivory fingers. “To be present is to endure the general unpleasantness of a world malignant by design,” it said. “I’m told death is the body’s natural response to insubordination.”

Once, when I was young, my body behaved against itself: I snuck up behind a boy and bludgeoned him in the skull with a plastic doll. He wept and wailed and shrieked an incomprehensible siren song, luring the shadows of other children from various corners. They formed a ring around us and pelted rocks and pebbles that had manifested from the earth. I became ill, disoriented, feverishly scanning the room for an exit. The children pointed and sung violent hexes in a language beyond conception. Shame lodged itself inside of me like a hot coal. At that moment, I became an expense. 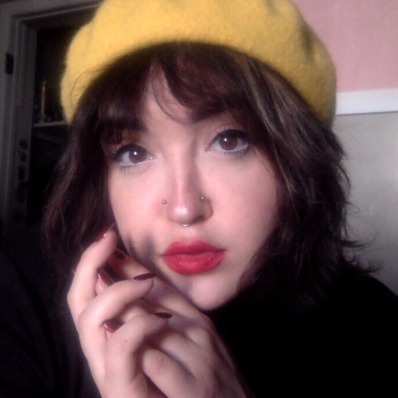 AVA WOLF is a writer, designer, and several children stacked on top of one another in a trench coat. Her work has appeared in Bedfellows Magazine, Occulum, Tilde Literary Journal, and more. She lives in Philadelphia with her broken hamper and an abundance of dying plants.