“Fetish / Recluse” is one of two magically sensual & intoxicating poems by Rita Mookerjee in our Summer 2018 issue.

I TOOK NIGHTTIME TO HIDE IN MY HAIR AND
considered how I confused lust with
a periscope. How intimacy was a seeing eye,
people’s faces in orgasm.

Through muscle memory, I learned to grab a bottle
from thin air. Since it only takes 21 days to make a habit
I hammered this magic in like ideology,
fists unsure what to make of sleep.

I dreamt of whiskey bottles with false bottoms
filled with index cards listing coping mechanisms
that I could call my own so I could stop
living as a caricature of myself.

Then sleeping alone started to feel like a victory
because I could pass out with wine in my mouth
a lump of gleaming brie on my nightstand
and for all my social inclinations, my time

in bed alone increased. I read the news and
considered myself lucky. I tucked corks into
jars around the house: awards for effective self-
medication. Smug quotidian trophies. 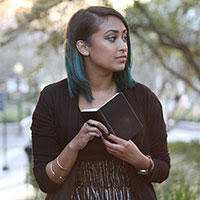 RITA MOOKERJEE‘s poetry is featured or forthcoming in Hollow, Lavender Review, Cosmonauts Avenue, Spider Mirror Journal, and others. Her critical work has been featured in the Routledge Companion of Literature and Food, The Bloomsbury Handbook to Literary and Cultural Theory, and The Bloomsbury Handbook of Twenty-First Century Feminist Theory. She is a PhD candidate at Florida State University specializing in contemporary Caribbean literature.

Like Loading...
“Madcap / Cabin Fever” is one of four sharply sensuous & sleekly surreal poems by the spectacular Jessie Janeshek in our Summer 2018 issue.

The fine-fingered winged girls
black lips/silent o’s
but I don’t have enough time between assaults
to let my hair grow back natural
so I find icy playboys
the ways their lips tingle with scotch
give the white high heels another shot
vow I’ll be productive
drink less or more             little sips     vow I’d be better
off in lands of moors
since I can’t stand your voices.

Introductions are worthless
you know my winged liner
another faux fur  and this is the dusk
through which I tote a glass lantern
through money and glitter
and Mari Lywd gloaming
and there’s not enough coffee
to mix with the liquor        before we jump in the roadster
or the river.

In the film I’m the dead aunt
and the contemporary ghost of myself
too afraid to move and I’m afraid I’ll lose
men, cigarettes or electricity
my cologne smells like moss
and I’ll find places to hang
my photos of Jean Harlow’s graves
and we’ll meet in the bathroom
and fuck in our bathrobes
as the topcoat smooths everything. 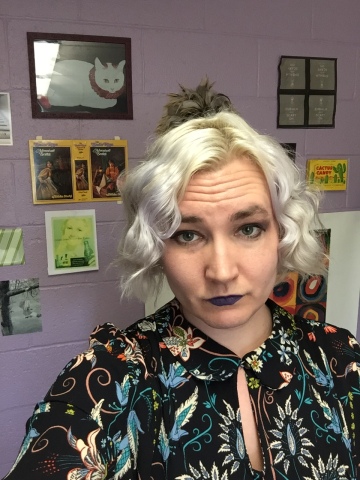 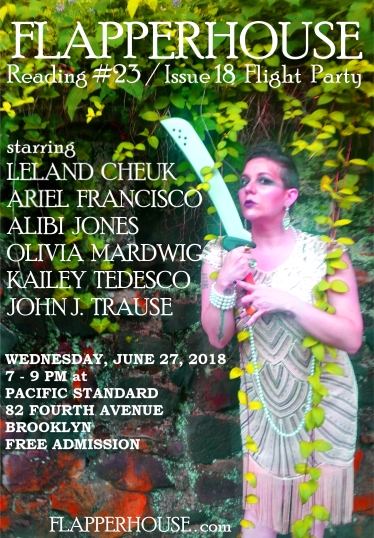 Join us Wednesday night, June 27 from 7-9 PM at Pacific Standard in Brooklyn as we celebrate the flight of our Summer 2018 issue, FLAPPERHOUSE #18, with our 23rd reading!

Admission is FREE, and you can purchase print copies of FLAPPERHOUSE #18 for the special reading price of $5. Facebook event page here. 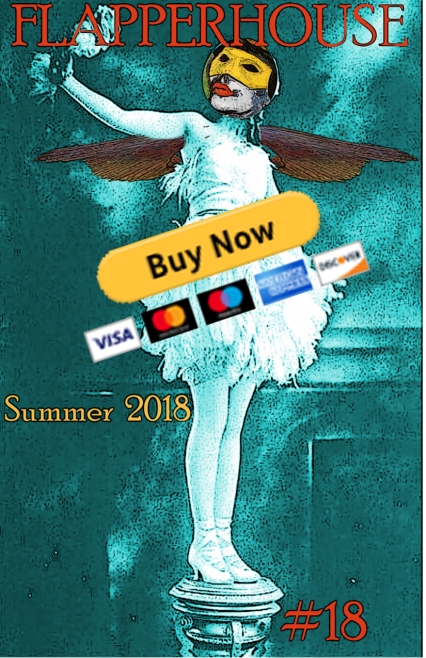 Our Summer 2018 issue, FLAPPERHOUSE #18, has finally risen from the deep! It’s stuffed to the gills with sex magic, hurricanes, leviathans, anti-romcoms, overly-realistic dreams,
doll-written novels, talking bodega cats, and so so much more…

PRINT copies available for $6US via Amazon

DIGITAL (PDF) copies now available for $3US via PayPal

(PLEASE NOTE: Unfortunately we are currently unable to email PDFs immediately upon order. Delivery of your PDF may take anywhere from several seconds to several hours, but rest assured, we will complete your purchase as soon as humanly possible.
We apologize profusely for any inconvenience or delayed gratification.)

Our Summer 2018 issue won’t rise from the deep until June 21, but should you care for a preview of what’s to come, here’s Perry Lopez‘s historical & horrific short story “Snapshot from the Revolution.”

THE NIGHT WAVES WERE ROLLING TOWARD CUBA, beating their steady pulse against the hull of the yacht. A rhythmic skip and crash in perfect blackness, and all our bodies leaning together. A jump and plunge amidst the rattle of ammunition, the dishing of gasoline in drums that we had lashed to the handrails because the tank would not hold enough to get us there, the sky that was starless, pure blackout, and pressed down upon our heads. Petroleum and sulfur and potassium nitrate, human sweat and nervous breath, the various agents of conflagration—all inert for the moment, jostling together. My finger was on the shutter release. Across my chest there was a double-bandolier full of flashbulbs. Magnesium, the smell of magnesium powder, which burns with near the same quality as sunlight: 5500 Kelvin.

I try not to hear the Giant’s voice, but there it is anyway. Words which he never spoke but instead I gave to him and believed in absolutely, there in that moment of body-terror and doubt, seminal blindness across the Atlantic, which was the power he had over all of us. Have spirit, brother Gusano. We do not need the heavens to steer by, not when we have pinned fresh constellations to the roofs of our minds. Would the man himself have said that? I can see his face speaking the words clearly enough, but cannot say for sure. I have written far too many speeches for Fidel Castro in my thoughts, and now he is dead—idol dead, paper dead—heartbroken at the age of ninety and buried beneath a kernel of corn, as you already know.

So instead take my clearest picture, the only one I know for sure was captured with my own senses. Everything afterward will be lies: Graffiti on their monuments. I remember salt on my lips. Body salt, sea salt, and an accordion crush of lungs fighting for space to expand. The deck was not meant to hold so many bodies. A compression of moncadistas and stark-ribbed exiles on the pleasure boat that had seen happier voyages. Eighty-two men in total, all packed to the gunwales, hustled aboard the North American vessel with its engine that stalled and stuttered like my own flawed heart, sending up the first oily smoke of our revolution, some of them sitting upon the very edges and holding onto the shoulders of their comrades so that they would not fall into the sea. An orgiastic colony of sweaty limbs and whispered confidences—Sierra Maestra, José Martí, the Latifundia, Our Lady of El Cobre, Castro, Castro, Castro—the germ of a new country caught between two great slates of emptiness, the sea and the sky, and a few brave ones sitting atop the crates of grenades packed in straw. A man coughed up vomit to my right and another leaned over the side to dribble his empty stomach across the midnight rollers. From somewhere close to the bow a voice was singing out in a bold, solemn spinto: Cuba, oh Cuba, a bright red flower for Cuba / One which smells not so sweet / Nor which bears aught to eat / Yet will bloom on from Gitmo to Bauta, as his words were sucked away by the wind. Where in all this was Fidel? Where was Che? Which of these darkly groping forms were Raul and Camilo and Almeida? And whose voice was that singing? Never mind. It is wrong to ask. Let them be for an instant like what was promised. A hum of bodies and voices and futures converging.

But in this polyrhythm of heartbeats they had their guns and I had my camera. A 35mm Zeiss that would be the eye through which the world watched our revolution (Castro’s hopeful thinking) and the tool we would wield against Batista’s newspapers. It swung from its strap and knocked against my chest so I raised a hand to hold it still. Already a bruise had begun to form there, a distinct green and yellow impression of the metal case stamped upon my skin. Your press card, brother, said Raul the day before, giving the bruise a rap with his knuckles. Now they will know not to shoot you. A painful blemish that would only grow with time. But for the moment it was best not to take the camera from my neck, I had decided, because if it somehow got lost or broken they would give me a rifle to replace it. One of those old American Nazi-killers we had bought in bulk off the Mexican black market. Rusty barrels with warped wooden stocks—M1 Garands and weathered carbines, Springfields as likely to explode in your hands as kill anyone, a few German Mausers with their dull metal luster—weapons whose history I wanted no part of, yet I think the others were eager to see me burdened with.

Some of the men had already urged as much. Their spirits took a vicious turn after four days at sea in the cramped vessel and several of them had cornered me in the back of the yacht. Open spaces are bad for revolutions, and in all that vacant water and cloudless atmosphere they had turned their eyes away from the horizon and found me there with my camera. Why should Gusano’s burden be so little, they asked. Why should he have to do none of the killing? Is he a coward? Their faces drew close as they took the Zeiss away from my neck, passing it from man to man and judging its heft against the weight of their weapons. I thought for a second they might throw it into the waves and that would be that; I would have to become a Guerilla too. But it was Fidel himself who came to my rescue. “Leave Gusano be,” the Giant said. In the noon scorch our Comandante stood high upon the flying bridge with his body like a stain against the sun and all of us squinting up at him, his wolfish nose and wolfish eyes directed down upon his militia, his arms held out cruciform and his fatigues snapping in the breeze, saying, “The purity of our Mexican must be preserved at all costs. A steady hand and a steady conscience. How else will he take good pictures of us?” This had quieted them and I was left in peace, or at least what passes for peace aboard a boat crowded with barbudos trained to kill their own countrymen. So I waited for the nighttime when we would all be blinded together again.