Our eternal thanks to everyone who helped make last night’s reading such a gruesomely grand evening: Stephen, Michael, Cooper, Jeremiah, and Deirdre for performing your flappy lits; Pacific Standard for the ever-gracious hospitality; and all you marvelous individuals who spent your All Hallows’ Eve with us…

Hope we’ll see you again for our grand finale reading, sometime in the Spring… 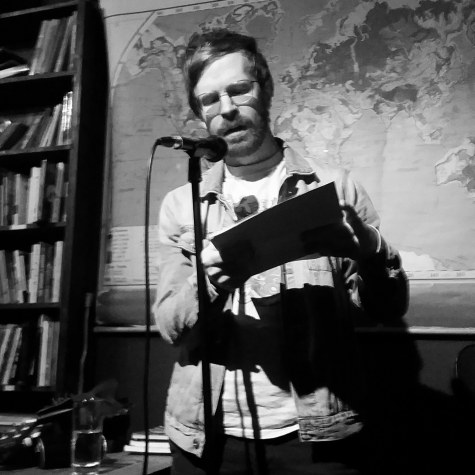 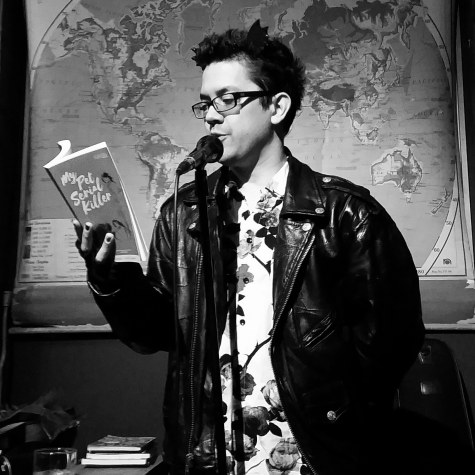 Join us Wednesday, October 31 from 7-9 PM at Brooklyn’s Pacific Standard as we celebrate the season of the witch with our 3rd Annual Halloween reading!

A young man’s bargain with a mysterious shopkeeper has some revolting repercussions in “Scent,” Cooper Wilhelm‘s magically disturbing story from our super-spooky Fall 2017 issue.

THE PORTION OF THE INTERROGATION THAT FOLLOWS was entered into the public record as part of a murder trial that commenced in the Eastern District Court of New York on August 14th, 2015. The suspect [name withheld] is described as male, Caucasian, DOB 12/5/1986, Height 5’ 11”, weight 190 lbs. The interview was conducted by Detective [name withheld] of the New York Police Department 94th precinct, 100 Meserole Avenue, Brooklyn, NY, 11222.]

INTERVIEWER: When did you first meet [name redacted]?

SUSPECT: In the shop. I was walking past two weeks ago and I could smell the incense. My girlfriend had been ragging me for weeks about how my room smells bad. Like a men’s—like a boy’s locker room. So I figured I’d get some.

INTERVIEWER: And you talked to him then?

SUSPECT: Not at first. I was looking around, picking up different kinds of incense and smelling them. But they had all this hooky-dooky stuff, too.

SUSPECT: Yeah, like crystals, star maps, and like, these little white sticks he said would clean bad spirits out of stuff or something if you burned them. It was all like stuff I’d hear people in my Warcraft guild say they needed for a raid, but in real life. And not cheap.

INTERVIEWER: So that’s when the two of you started talking?

SUSPECT: Yeah. I’m buying the incense and I ask, you know, like making conversation, is this your shop? how long you been selling stuff like this?

And he’s like oh we’ve been doing this for a couple years. We used to be a perfume shop, but we couldn’t make ends meet. And then I tried this money incense and I thought I should start selling it and I branched into other magic whatever since then.

And he starts talking about the crystals and about talking to ghosts and spirits and gods and it’s creeping me out. And the credit card machine won’t work and I start really wanting to leave, like I’m getting the willies from this guy, and he’s sweating a little as he talks to me, and his eyes were, um, they were. . . .

INTERVIEWER: Did he threaten you then?

SUSPECT: No, not then, no. He just told me he would give me a free sample of this cologne. And he pulls down this big plastic bottle, like the kind bulk cheap paint would come in in art class. He squeezes out this dark oil, like purple but almost black. And he tells me all cologne and perfume is oil, it’s just that the stuff people buy is watered down usually. This is the pure stuff. And he puts some on my finger for me to smell.

SUSPECT: Weird. I mean, I don’t know how cologne is supposed to smell. I mostly just use Axe. But this smelled weird. Like ammonia and rust.

I really just wanted to get out of there because he keeps staring at me. Even when he puts some cologne in a little vial and hands it to me he never stops looking at me.

INTERVIEWER: Did you leave then or stay longer to chat?

SUSPECT: That’s it. I go home and I make dinner. And that would’ve been the end of it. But when I’m pulling stuff out of the fridge, I see this thing on my finger. It was gooey, like three soft little yellow eggs or little balls or something, that were sticking to my finger with this yellow goop. Like what wasps use to stick their hives to the undersides of roofs.

I washed my hands. I figured it’d gotten on me on the subway, but now I think maybe it was on those little sticks I picked up at the store. END_OF_DOCUMENT_TOKEN_TO_BE_REPLACED

A million howling thank-yous to everyone who helped make last night’s reading such a deliciously dark affair: Lisa, Joanna, Stephen, Bud, Deirdre, Keegan, and Cooper for performing your flappy lits; Alibi Jones for your spooktacular singing & photography; Pacific Standard for your always-gracious hospitality; and all you beautiful creatures who came to witness our mischief.

Let’s do this again in January…

Lisa Marie Basile gets things brewing with a reading from Nympholepsy 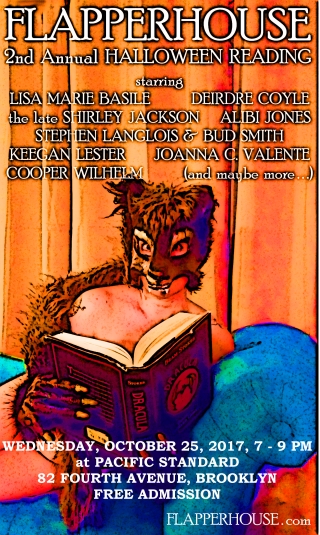 Join us as we bark at the moon & revel in the macabre with our 2nd Annual Halloween Reading, this Wednesday, October 25, 7-9 PM at Pacific Standard (82 Fourth Avenue in Brooklyn).

Admission is FREE, and you can get your claws on copies of our Fall 2017 issue for the special price of $5.

A resounding chorus of thank-yous to everyone who helped make Reading #15 such an epic evening: Bud, Sarah, Jane, Aesop, Cooper, and Ilana for performing your flappy lits; Alibi for your seductive singing and scintillating photography; Pacific Standard for your always-gracious hospitality; and all you gorgeous people who came & graced us with your presence. Let’s do this again on June 28… 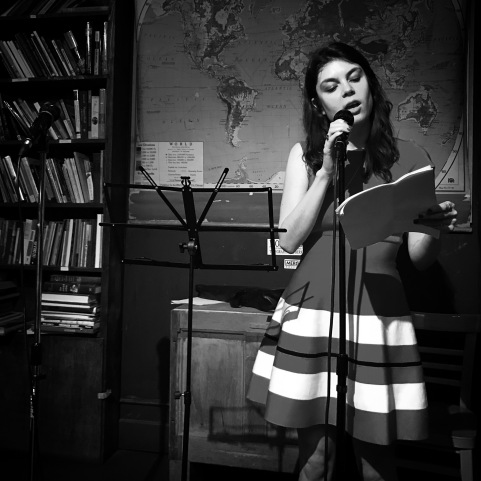 Jane Ormerod performs her poem “Kiss With Recorder and Killer”

END_OF_DOCUMENT_TOKEN_TO_BE_REPLACED

Succumb to our seductive siren song as we host our 15th Reading on Wednesday night, May 31, 7-9 PM at the always-hospitable Pacific Standard, 82 Fourth Avenue in Brooklyn.

“Slept Through” is just one of two sizzling & surreal poems by Cooper Wilhelm in our Fall 2016 issue.

Three ropes tethered the neck and wrists of my uncle to a tree stump,
while his brothers pulled at his ankles as at fishing nets
trying to heal his back.

Kids only understand the medicine of pain,
how a new success of suffering gets
it over with;
the splinter dug out with a needle,
from the hand held out as if to test the rain,
as if to receive a coin under
whose sharp skin sleeps
a lightless room of chocolate.

END_OF_DOCUMENT_TOKEN_TO_BE_REPLACED

A million creepy-crawly thank-yous to everyone who helped make our first-ever Halloween reading such a graveyard smash: Cooper, Michael, Shawn, Joanna, Darley, and Stephen for performing your spookily flappy lits; the late Rod Serling for guest-hosting; Alibi for your sinister singing & stellar photography; Pacific Standard for their always-gracious hospitality; and all you beautiful freaks who came out to enjoy the show. We hope y’all have a Happy Halloween, and we’ll be back for reading #12 early next year…

(photos by Alibi Jones, except where noted) 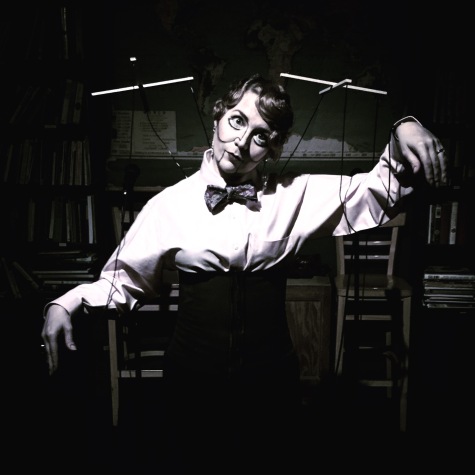 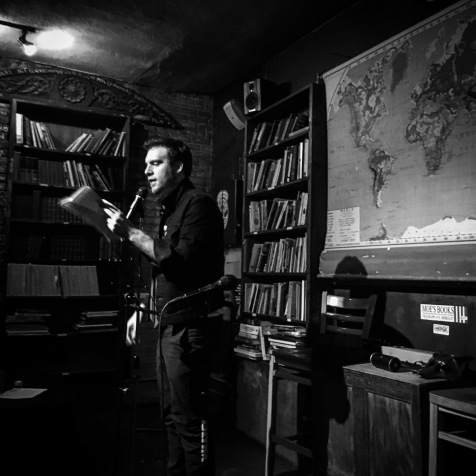 Cooper Wilhelm terrifies us with a transcript of true-life horror

A thousand gabba-gabba-heys to everyone who helped make Reading #10 bop like a rock n’ roll high school: Cooper, Nancy, Adam, Ilana, Emily, Armando, Monica, and Stu for performing your flappy lits; Alibi for your stellar singing & striking photography;  Pacific Standard for being as cool a venue as CBGB (but much cleaner, of course); and all you punk rockers who came out to be part of our happy family; we’ll do this again on October 26 with our 1st-ever Halloween-time scary story celebration… 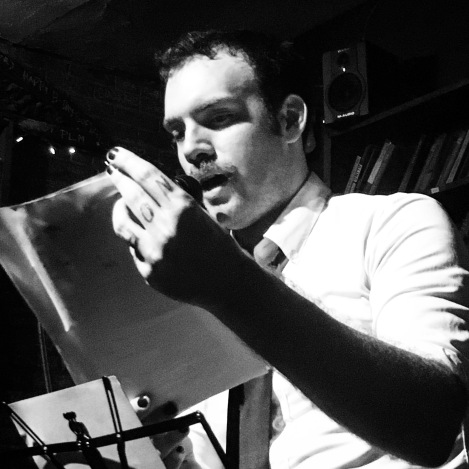