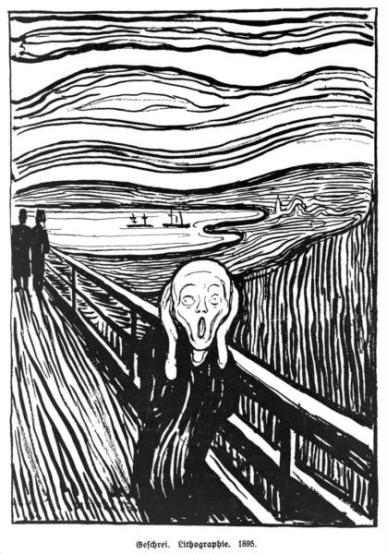 A woman wakes up dead on her seventieth birthday in “The Scream,” Gloria g. Murray’s phantasmically surreal short fiction from our Winter 2019 issue.

WHEN I AWOKE THE MORNING OF MY SEVENTIETH BIRTHDAY, I KNEW I WAS NO LONGER ALIVE.  Every part of me seemed so light under the sheets.  I tried to move each limb but without sensation. My eyes seemed open yet I couldn’t blink. My fingers were clawed around the sheets.

I looked about. The room seemed the same—the screen saver on my computer zigzagging into pink, green and yellow lines, the sunlight filtering through the blinds, my pink slippers positioned at the side of the bed. Everything was as always until I looked into the mirror. My mouth was open in a Munch scream so that I couldn’t move my lips. I put my hand on my breast but felt nothing, not even a flutter.

It seemed like I floated down the steps to the kitchen. Everything was as usual—the coffee pot ready to brew. I turned it on to hear that sweet, perking sound, inhale that savory smell. I opened the blinds and stared out at the familiar sump across the street, my neighbor’s American flag blowing in the January wind. Perhaps it was all a dream. Yes, a Picasso nightmare from which I would eventually awaken. I avoided the mirror in the hallway. I wanted to speak but my mouth wouldn’t move.  I grabbed the phone but it fell from my hand, and then I too fell to the floor. I lay there for I don’t know how long before I heard the front door opening.

A man and woman walked in. Hmm, lots of goodies here, the woman said. Yes, most everything is sure to go, the man answered. We could probably set it up for three weeks from today. The woman nodded and they proceeded to walk around, inspecting everything. After admiring one of my statues, the woman said—Oh, this Rodin, I’m sure it will go!  Oh no! Not The Kiss, the one I found at a garage sale and sprayed pale pink to cover the cracks.  And these prints of Frida Kahlo, the woman smiled—lovely.  But I’m not sure in Suburbia many would know who she was.

I poked at my mouth. Damn it—OPEN!  They continued walking around, tapping the piano keys on the out-of-tune Winter upright, the one my dear friend played while I sang off-key, the one he claimed was firewood.

Well, we might get something for this—but it’s doubtful, the man commented. Hmm, the woman agreed. Then they went upstairs to my bedroom. Well, look at this, the woman said, rattling through some of the files and papers on my desk, examining the computer my fingers had stroked like a lover, long, long into the night. The lady was a writer. How about that?  Well, we might get something for the computer and printer. I suppose her children could come and collect the books and the writings and any other incidentals.

My poetry, plays…poetry for which I had never achieved real notoriety, just a local contest now and then, the two free contributor copies, a couple of my plays performed at local one-act festivals by senior citizens in various stages of Alzheimer’s.  The couple wandered about for a while before they came down, took one last look around and closed the door behind them. Yes, they had come and assessed my life in all of ten minutes.

Soon the mail would come, the mail, which had been the major event in my uneventful life. The mail that would deliver my long-overdue success. I always thought it would be quite interesting to make a collage of my rejection slips. But how would I arrange them: according to date, size, personal, impersonal? For lack of anything else to do, I entertained the thought for a while. Finally, I heard the mailman, the slip of mail in the box. As always, my hands shook as I removed the contents. How I loved the feel of the long crisp envelopes. As usual—bills, advertisements, but…wait…there was one of those stamped self-addressed envelopes, the one that would confirm my destiny.  Shakily, I ripped it open and read:

Dear Writer,  We are pleased to inform you that your poem ‘What I Want’ won first place in our Writer’s Nationwide Poetry contest.  The winning poem receives a prize of $1000 which will be sent to you in a few weeks.  We will be printing it in our magazine and online.  Congratulations!  Sincerely,  The Editors.

I began to sob. No tears rolled down my cheeks but I knew I was weeping. I really wanted to laugh, shake my fist at irony, the way it twists our life around—irony, that sinister traitor of all traitors.  How I wished I could share that glorious moment with someone dear, actually anyone at all. I put on a jacket and gloves and went out on the porch but really couldn’t feel anything, not even the sun slightly warming the January air. I rocked in the rocker, waiting for time to pass.  At four I watched Judge Judy, admiring the way she cut through the bullshit. She might well be one of the smartest women alive, maybe even a candidate for the first woman president.

Well, it seemed being dead was just as boring as being alive, although it had its perks. About four or five times I ran out in front of cars, daring them to hit me. They just drove through me. I took a knife and poked it into my arm but never drew blood. And I must admit—it was sort of freeing. Finally, all those years of fear, panic, avoiding potential dangers, threats to my mortality—at last I needn’t do it anymore. I banged my head against the wall about ten times and never felt it. It was sort of strange but you could say now I was really able to live.

I wondered how dead people socialized.  I mean if this was for all eternity it could be pretty damn lonesome. Did they have ads on the eternal internet? Dead people dances? Did they communicate without words? A thousand questions raced through my mind. I tried to comfort myself with the fact that now I could call myself a poet, post-humously of course, but still successful.

Then depression enveloped me when I realized I would never see my children, my grandchildren, my friends, never, ever again. I would never laugh or cry with anyone, touch anyone, really scream.  Yes, now I understood why Munch painted it. It was a masterpiece depicting the most absolute horror of the human condition.

Finally, I think I fell asleep listening to Chopin’s Nocturnes and reading The Wasteland, which I had never really comprehended, but it didn’t matter because the words played magic with your senses.

When I awoke that Tuesday, the day after my seventieth birthday, I knew I was alive and that something extra-ordinary had happened—a dream of such enormity, it could hardly be thought of as one.  Hesitantly, I looked in the mirror—my face was the same, even the mouth, just ordinary lips over slightly bucked teeth.  I pouted.  I smiled.  I grimaced.  I was me again! I rushed down the stairs in utter joy. The kitchen was the same, the coffee not yet started. Then I saw it—the letter on the table, the acceptance letter—and I picked it up hesitantly, but the page was blank: nothing, not even a letterhead.  My hand on my breast touched the steady beating of my heart. How good it felt, how comforting.

I was sipping my coffee when I heard it—the front door opening. A man and a woman were talking. I heard their footsteps in the living room. The woman said: Oh, look at this—a Rodin—how charming!  She began caressing it. Then it began to rise in my throat, opening my mouth in that permanent pose.  I tried to call out, but again, there was only silence.  I heard them going up the stairs.

Then I could hear them rummaging around.  I knew that soon they would be leaving and when the door closed behind them I would be locked forever in this…? I knocked over one of the chairs, hoping the sound would catch their attention.

What was that?  I heard the woman say.  Probably mice, the man answered. I could hear their feet coming down the steps before I slipped down into the black hole of the scream. 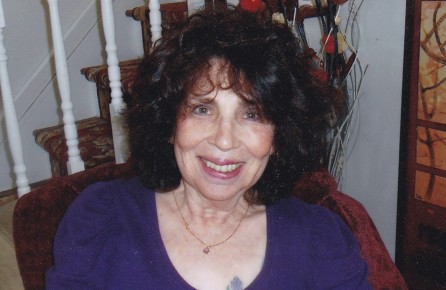 GLORIA g. MURRAY’s poetry and prose has appeared in many journals. She is the recipient  of the 2014 first prize Anna Davidson Rosenberg award, Poetica Magazine, as well as third prize in the 2017 Writer’s Digest Poetry contest.  Her one-act play was published in The Art of the One-Act Anthology, New Issues and presented off-Broadway.  She is the author of three poetry books.

1 thought on ““The Scream” – Fiction by Gloria g. Murray”