THE TALKING SHOP MONASTERY FOR TROUBLED SOULS was located within the inconceivable stretch of land in between Sunn and Elliot avenue, a hep spot for any lost bloke who finds himself awed by the remnants of the garden that once was, most many disregard. But behind the stacks of meaningless junk there is sentiment.

It takes the form of a vomit stain on the pavement.

There’s a manor behind it. You’d ought to think you’re seeing the bowels of the Earth. It’s all sodden with spirit speech & revolutionary manner. All of its inhabitants barely inhabited the body half the time. They were all too busy soul-searching.

But then came The Jazz Man, the most present of the local presence. He knew the tune, the vibe that set the joint in motion. His language was the music and the music his mantra.

He was a conspicuous character from the start. Could sit so undisturbed in a busy room. All the old folks had a kind word to say as he sat unspoken. No one else spoke his language.

During group meditation their only means of communication to him was a sitar loop that seemed to speak volumes. The circle of madhouse babble and artspeak made quite the revolutionary backdrop. Each melodic ragging soothed the bellied long-haired monks, that it was only a matter of ease that brought them to the light of jazz.

He hung his petticoat on the altar. They all hoorahed.

It was here they deemed each art a god, a holy practice.

The shell they shed like cicadas, all those bodies piled round on the burlap mat. Each passerby who heard that jazz spat obscenities like origins of the character were an offense to their tradition.

The lot of lucids was now ground for protest.

“No free thinking in my civil city! Enlightenment is a cult act!” They claimed, but not so wisely.

It was Bluebird that twisted the tables. She was bilingual. And knew each art naturally, had a hand for the harp and horn. Even wrote a few manifestos in her youth. The cat made a drag of her entrance. Clung to the poor pillared column that was at its end, already on tilt.

She kicked a saddle shoe to the ceiling and feigned speaking. Her bottom sat on the plum colored cushion where the Bobbies and the Rays served tinctured waters and teas. Mind you this was no ordinary establishment.

For one, it was rudimentary that they sit cross-legged when cushioned.

There was no leaving the premises without a piece to your name. And she, Bluebird of the talented gene, enticed each beneficiary with a tribute of her talent.

“Straight with rainwater from the basin. That old barrel out back. Petals all garden grown. A soluble of white wine- you’ll adore it.”

And made so intrinsically with palms molded so thoughtfully around a moon mug, the drink was brought to her with bowed head.

She shifted in form of a painting, one elbow bracing the pavement. Tile disheveled with dirt stain, she was inviting every social strain with the flutter of a lash.

And the Jazz Man, The Jazz Man did what the Jazz Man can. He walked his way with the snap of his fingers down the great degraded avenue. Right into the premise of the great big bird blue.

To take a seat next to her– slightly slouched as she was sprawled. He rung up a Dharma Bum, one of their best beverages, a tea tincture. Milk-riddled. He sat in patience, a meditative state where he studied sheet music and one upped an octave.

Though something was an unusual distraction– a low-lite voice that screamed of vixen– and this had him interested.

“You’re a cat. Voice like an angel.” He says under his breath, hiding behind his dark skin as his voice boomed.

His big fumbling hands press against the oriental end tables that were used to snack upon.

Regulars were seen smoking hashish from hookahs, all gathered around in a rotating centerfold, fiendish for that muse. But big Jazzy only smoked from a pipe– puffing ground tobacco to entice the curious. And baby Bluebird had an itch. A song to sing, a tale to belt out all at once in soprano.

“Love is a beautiful thing,

Don’t you know it babe?

I love the Blues that I sing-”

She snapped and the religious fanatics came kicking to act on that beat. They did not understand the music, but they wished to. And the Jazz Man longed to convey the shock and bewilderment he’d faced from the voice.

So much so, he forgot entirely of his drink and got off his bum. Pleased by the serenade, he pushed his way through the circle that had gathered around the juke. Artists noiding over spilled paint. Writers spitting poetry, each a new verse. He had heart eyes right at that music machine– and his fingers fumbled for a tune clicking away at the beat-up artifact.

Something to sing to, and something the swingers could shake to, he had in mind.

And she hopped on it faster than he could hum an uno, dos. She was the lady with the golden stockings, a vision of star time. A dime amongst a dozen of pennies.

You could see it, as she shaked and sauntered down to her knees, taking in the holy spirit the tune breathed into her body like a waft of fresh air. A vigil to her voice-

“Lady, oh lady!” he moaned, taken by the moment. The man wished only to take her within his arms and cradle the talent between his grasp and say something of his newfound discovery.

He was not the only music muse!

The whole crowd was roaring!

They tipped their hats and even tore them from their heads!

Would she be a regular, they asked, would she sing for them again? Yes of course, she said! All awed, one big unified smile and a congratulatory whistle.

You wouldn’t imagine the substance of this performance. To it there was a universal flow– a sublime sound the gods themselves handpicked.

Ginsberg, painted on the walls. Bukowski, in the garbage out back. Pictures of Ray Charles shining down upon them– in this the lord handed them the light.

He couldn’t help but swallow the chica up in his arms, spin and twirl her, weightless in the limbo between the right side of the brain, a cakewalk of literary spur. She adored to be touched, worshipped in such a complementary manner, more or less by a man her musical senior.

And what a timestamp of talents! The two so enthralled by each other musically, how they vibed to the same rhythmic fury. All a sight for sore eyes, such a budding romance.

You could feel the influence building all around as they got out their pens and picks and struck up a tune. The surrounding walls were a regurgitation of paper statement that stared them down into dawn. In their shadow a mug. Moonman rising. The split between logic and creative disaster, it was a reflection of pure desire, impulse. The lust of two musicians– a voice for miles and fingers as quick as lashes. The floor in the witches’ kitchen (as they called it) was mint green tile, upchucked and battered by all the feet that braced them.

He took and carried the dame and laid her upon the wide-open space, the only open space in the whole joint, and kissed her tenderly without any affliction. Her lips were so inviting, and held no restraint in bracing them before his.

A match made in the haven of The Talking Shop made history. Pictures upon the walls of the Paramour– polaroid perfect duo. They made harmonies as sublime as symphonies and spoke holy into the starry night. Carrying the monastery onto an eternity of seraph speak.

Forever be their love. 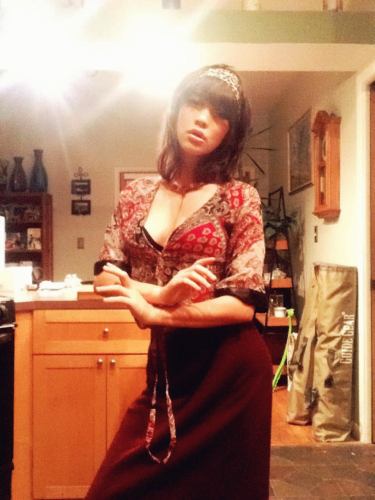 HARLEY CLAES is a poet and novelist from Detroit, Michigan. She is also an editor at Homology Lit. Her first self-published anthology is titled Pity The Poetics, a collection of poetry and short stories. She attended an all arts school majoring in Creative Writing. Her favorite pastimes include caring for her plants and making perfumes. You can find her in various other journals such as Terse Journal, Anti-Heroin Chic, Rose Quartz Journal, and more!

A few weeks ago I got a DM from the editor of this new zine, whom I'd never met and, aside from a brief personal decline I sent in response to a story he submitted to FLAPPERHOUSE many months ago, had not corresponded with before. His message said some very nice things about FLAPPERHOUSE, and he offered to send me a copy of this zine he started called EXCUSE ME. I finally read it & was delighted to see how it's keeping the spirit of weird, irreverent lit alive-- plus I was surprised & tickled to read a special shout-out in the issue's intro. Anyway if you still miss FLAPPERHOUSE you may want to check out EXCUSE ME. Find them on twitter @MagExcuse
Our managing editor @josephpob gives one last once-over to our Year Five anthology before it flies on 10/31
Our Year Five anthology, containing all four issues from our final year, will fly at last on October 31.
Four years ago today was a very special reading. We launched our 7th issue with a stellar lineup of readers (including the late F. Scott Fitzgerald, our first ever dead writer guest). We also had one of our biggest & best crowds for this one, including a few people seeing us for the first time-- Stephen Langlois, Ron Kolm, and Shawn Frazier-- who'd go on to become beloved members of the Flapperhouse family
Three years ago today, we went back to school with a vengeance & got in trouble with all these fierce writers for our 10th reading
The poster for our very 1st reading, which occurred exactly 5 years ago today
Print copies of our last issue finally arrived to FLAPPERHOUSE HQ, and our managing editor @josephpob is highly delighted. Anyone who is due to receive a copy of this baby from us should have it in their paws within the next week. We apologize for any inconvenience or delayed gratification.
Flappy New Year, everyone!
The amazing @xoalibijones crafted this awesome collage of every FLAPPERHOUSE cover as a Christmas gift for our managing editor @josephpob