From our Spring 2018 issue, Melissa Mesku‘s “Dead in the Eye” is a short coming-of-age story about ducks and cigarettes and the strangeness of adolescence. [And if you’ll be in the NYC area on Wednesday, May 23, you can catch Melissa read among our stellar lineup of writers & performers at FLAPPERHOUSE Reading #22.]

THE BOYS CAME BACK FEVERISH, YELLING OVER EACH OTHER. Aunt Grandma climbed down from the trailer to hush them. It was just after twilight but their eyes were wild, glowing. Bright impossibilities spilled out of their mouths.

Aunt Grandma’s twin came out of her trailer next door. The boys saw they had a new audience and ran to her, shouting. They crowded around her like dogs. She was a bit drunk from what we could tell – rum, no doubt – and we listened to her “Mmm hmm” and “You don’t say” while all four boys ran at the mouth. More details emerged.

1/ The witches were sisters

2/ They weren’t witches, but vampires

3/ Regardless, they were lesbians

The way they told it, the whole mountainside was abuzz with rumors. Apparently, the only fact they agreed upon was that the offenders – two females – had disappeared at sundown in a cloud of smoke.

Violet and I sat in our tent with the lights out, our sides heaving. We clutched our hands over our mouths and stayed silent, stone silent. We had nothing but contempt for the boys and their ridiculous stories, but for once we were enthralled. The cacophony was theirs, but the mischief that had unleashed it was ours.

That night, in the dark, Violet and I swore that tomorrow, we’d return to the scene. “If what those boys want is a witch, a witch is what they’re going to get,” she said ominously.

It’s just as well we made that promise under the cover of night. I had trouble looking her in the eye those days. Or maybe she had trouble looking at me. In my naïveté, I assumed it was because if our eyes did meet, we would have cracked up and blown our cover.

Just that morning we were alone, far from the boys. Aunt Grandma’s twin had given us the day off from babysitting them, and then made us a hot cup of rum and a cinnamon tortilla for breakfast. Life was good. With a whole day and nothing to do, we set off for a long meandering walk.

In the sunken meadow, we cut across a campground and started daring each other to do stupid, annoying things, the kind of things you think of when the mountain air is thin and you’re fourteen and drunk and it’s summer. We came across a half-full pack of Marlboro Reds on a concrete table that may or may not have been occupied. I grabbed them, or she did, and we and ran and kept running until we were on the other side of the ridge. Then we found a shady spot on a hill that faced a marsh of tules and reeds bordering the lake. It was there we sat down and spent most of the afternoon.

It would be another hundred degree day; the backs of my knees were already sweating. From my squatting position in the shade, I reached for another Marlboro. I didn’t want it but I wanted to know what it was like to have three in a row. Violet reached for the lighter. I thought she was going to pretend to be gallant and light my cigarette but instead she started digging with it.

I kept the unlit cigarette between my index and middle finger. It felt glamorous. I casually gestured out over the lake, like I had something grand or philosophical to say.

“How boring to be a duck,” I ventured.

“You think so?” asked Violet. She looked up from her small digging project. “I’d be a duck. They just glide around all day, nothing to do. Like that one,” she pointed. “It looks like that sweater I have, the brown one with the flecks on it. I’d be a sweater duck.”

I squinted in the sun. Violet returned to digging.

After a few minutes she said, “Here, don’t smoke that.”

“Come on, let’s save them for later. We can hide them,” she said, grabbing the box. I handed her my cigarette and she slid it back in and closed the lid. Then she set the box inside the small hole she’d made. It didn’t quite fit. She got up.

I was looking at the sweater duck, its bulbous body sliding through the reeds, when Violet returned with a stick and started digging in earnest, standing.

I got up. My eye returned to the duck, just beyond the reeds. Then I noticed something.

She turned and looked. “What what is?”

I pointed. “That big lumpy thing in the water. By your duck.”

She started off down the hill, stick in hand. I grabbed the cigarettes and followed her.

At the water’s edge there was an outcropping of rocks with reeds bunched around them. I figured I had been mistaken about seeing something. But then I saw it.

“Get away from there!” she yelled.

I screamed. I thought she was yelling at me, like she had seen something evil.

But when I looked at her, she was looking back up the hill where some boys were approaching. There were three of them; they looked about sixteen. She raised the stick above her head and ran back to the spot where she had dug the hole. Waving the stick like a scepter, she barked at the boys. “You heard me, fucking leave or I’ll murder you!”

She came back down the hill victorious, having chased the boys off.

“Asshole boys, they stole the cigarettes,” she said.

“No, I grabbed them.” I pointed to my pocket.

“Thank god,” she said. She slowed her walk as she approached the edge of the lake. “So what is it?” she said, peering into the water.

“I don’t know. It looks like a dead duck,” I said. I started to climb my way out of the reeds.

Violet moved closer. “Let’s get it.”

I stood back with my fists on my hips, watching. She really was going to do this.

After we were done, we sat down. It was late afternoon; we’d have to head back soon. I pulled the cigarettes out.

We sat there and smoked. I stared at the lake. It was black; the sun had already sunk below the tallest mountain. Violet sat with her back to the lake, facing me. Only, she kept looking away. She had been all day. When finally her eyes lit up, I turned and saw what she’d been looking for.

At the top of the hill were the boys again. Not “our” boys – her brother and his tween friends – but real boys, the older ones Violet had chased away earlier that day. What, was she worried they were going to come back and steal our cigarettes? What did she care about these boys?

She stood up. I turned fully around to watch because I had no idea what she was going to do.

With half a cigarette in her hand, she gestured flippantly at the lake. In a sardonic tone, she called out, “Really? There’s nowhere else at this whole goddamn lake where you can FUCK OFF?”

One of them yelled back. I didn’t understand what he said. I didn’t think she did either, because I asked her, whispering. She just shook her head, still staring at them, while a half smile threatened the corners of her mouth.

The boys stood there a long minute. Then Violet grabbed my arm and ran. Not the way we came, which would have brought us right past them, but some back-ass way we’d never gone before. We doubled back through the campground, across the sunken meadow now almost completely enshrouded in darkness, and emerged at Aunt Grandma’s encampment, breathless and excited.

It was only another half an hour or so before the boys – the ones we babysit – showed up breathless and excited as well.

It was half a lifetime later before I realized that the excitement I felt then was more like theirs than it was Violet’s. When her eyes lit up, it wasn’t just stories, antics and silly myth-making. I was too young and underdeveloped then to see it. Even if I had looked her dead in the eye. 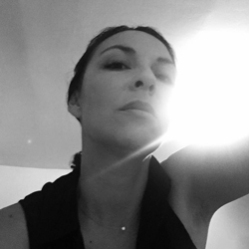