A woman discovers just how twisted Hell can be in “The Underworld is a Multiverse, and All Your Lovers Are Invited : Part 1 and 2,” Laura Podolnick Dukhon‘s demonically hilarious short story from our Spring 2018 issue.

Part I: If You Break Hell It Only Gets Worse

I WANDERED INTO HELL BY MISTAKE, on a thunderstorm skulk while I cried and asked God questions. I paused for a moment and ducked into a warehouse, half-hoping to meet my doom and half-hoping to take a break from the rain. The ground split beneath me– smooth pavement separating to an obscene crack directly under my size three Converse high-tops, the crack then growing and sucking me in, enveloping me like a giant, jealous vagina.

Hell is a charade that takes place in a ballroom, and the cast comprises men who no longer love me and men who never did love me, dancing the tango, the foxtrot, the merengue, and a variety of other steps with nubile, big-eyed, dewy-limbed young women wearing slinky satin underthings and too much red lipstick.

Hell is round, so there are no corners in which to hide. My ex-paramours and not-quite-ever-paramours are dapper in tuxedoes and they are all sweet-smelling and cleanshaven. The one I’d taken to calling The Worst Person In The World waltzes by and gives me a wink. His hand, though still managing to hold an unfiltered cigarette, is conspicuously beneath the silky half-slip of his curly-haired dance-partner, who audibly hums a haunting tune that calls to mind requiems, ghosts, genocides.

P___ ignores my presence and is a poor dancer. At least there is that. The girl grasping onto his shoulders looks bored, as though she has been hired to be here. Y____ and I lock eyes for a horrible moment and tears well on both sides, but then he looks down and looks up, all while wiggling a violent tarantella. His partner appears nonplussed, so I want to punch her for her insolence. W___ does not remember who I am. His cha-cha could use work.

A__ comes over to talk. He first whispers to his partner, who crosses her arms and rolls her eyes. He runs over and asks if I am okay. “Considering this is Hell, I’m peachy,” I reply. He seems surprised to know that we are in Hell. I direct him to the sign over the refreshment table: Welcome to Hell, it reads in a fancy script. “I have to get back,” A__ says, pointing to his irritated partner across the room. I nod.

The walls are garish, baroque, pale orange and pink sherbet swirls and curlicues. The carpet is a periwinkle floral. The chandeliers make everything just a little too bright and a little too yellow.

I begin to dance awkwardly, alone, moving towards the center of the room. I feel the girls all staring at me, judging my inappropriate attire, my unkempt hair, my dripping mascara, my tired face. They all glower from stiletto-heeled heights, and their high, neat ponytails flick like whips upon every turn. I figure it is Hell, so there aren’t really any rules of etiquette to break, and it can’t get any worse, so I resolve to make a scene. Now in the middle of the floor, I slither out of my coat, my corduroys, my Henley, my shoes, my sweater, my socks, my unattractive underwear, until I am fully naked. I look to the mirrored ceiling and there I am, pink and shiny, raw, like a scar. The room has moved away from me and I am alone at the center, writhing, naked, arms out, looking up. I am in Hell, so it follows that the rules of physics do not apply, so I try to breathe fire from my mouth. It works. The girls who were laughing at me stop laughing. The gentlemen look less aghast now and more afraid. I shoot blasts of smoke from my nose and I fart tear gas from my very butt. Everyone is coughing and covering their faces, to protect themselves from my glare, my noxiousness. I make swords grow from my fingertips and scales and horns sprout from my back. I commission six tails, each with a dragon’s head, and my nipples are miniature machine guns, delicate, pink. Just when I start thinking that Hell is a lot nicer when I am not the only one having a bad time, the fire alarm goes off and all my exes file out, each holding another girl’s hand. I join the end of the line, but when I get to the double doors, I cannot fit all my new body parts. I try to undo them, but they don’t go. Hell, apparently, does not allow subtraction. The dragon heads on my tails bite each other, and it hurts. I stumble over to the refreshment table and pour myself a cup of coffee. There is no milk.

Part II: An Explanation to a Group of Inmates Concerning the Lack of All Breakfast From Now On

Gentlemen: The day after the world ended, God smiled and put his hand on mine. It was time to decide, he said. He asked me if I’d prefer my ex-lovers and ex-not-quitelovers to be sewn together dick to asshole, dick to asshole, dick to asshole, and forced to remain that way for all eternity, or if I would rather have each one of them shrunk to 1/100th their size and inserted into tea bags, to be steeped in boiling water when God craved a warm afternoon beverage.

I thought about both options. It was hard. “I like the togetherness of the first scenario,” I told God. “There’s something really relaxing and comforting about the idea of all of them interacting so intimately, forever.”

“But,” I said, “I also like the idea of each of them suffering years of isolation, and then dying alone and small, in boiling water.”

“Yes, many people feel that way,” said God. “I did my best to think of situations that had a great deal of appeal, and also, man-tea is a delicacy up here.” He smiled at me and patted my hand, which was still under his. His skin was warm, which surprised me, though I wasn’t sure why.

Emboldened by God’s kindness, I decided to take a risk. “I wonder, though,” I tested. “I wonder if it would be possible for me to, well, propose a different scenario to you. For your approval of course.”

God furrowed his brow and looked off to the left. Slowly, he nodded. “Sure, sure. I don’t see why not. Let’s hear it.”

After I told God the plan and he approved it, the gentlemen, now trapped in unrequited love with me forevermore also lived in a physical jail–perhaps more of a dungeon, but without gothic trappings like gargoyles or candelabra. It has all modern conveniences. Each gentleman has his own cell. I supplied each cell with a pair of my dirty panties, which the occupants sniff, lick, worship, and sometimes even wear. These undergarments get replaced monthly, because I prefer to keep things relatively sanitary. I also gave each ex a photograph of me to kiss, and if he is so inclined (and all of them are), to cry to all night every night. The photograph is the same for everyone–in it, I smile like Mona Lisa, cryptic and withholding in response to their tears and moans. Everyone knows that the photograph is recent, and that it was taken by another man who fucked me. A common jailhouse conversation topic is whether this man and I made fun of any of the exes while we had sex. This conversation inevitably leads to arguments and usually, death threats.

I perform a daily walk down the corridor between the rows of cells, in stilettos, and the gentlemen all fall to their knees and grab at the bars of their cages, begging me for attention and affection and love. Some of them weep without words, and some of them attempt apologies for past offenses. I hate apologies so this is never rewarded.

The weirdest part is this: When I go home at night, I sit morosely on my couch, naked and unshowered, all hairy legs and hairy armpits, with a cup of tea balanced on my repulsive but utilitarian rolls of abdominal fat, and look at Facebook pages, Instagram feeds, emails, and photographs from when we were all still alive. On the internet, my exes are not trapped in unrequited love with me, living in jail cells and sniffing my dirty underwear while weeping. They are free and doing mostly fine. They are going to work everyday and are dating tall, interesting women with architectural noses. They have become besotted with inappropriately young naifs with perfect skin and no education. They have left the city and become domestic, living upstate with mouse-like, nonthreatening, crunchy women who are into biking, baking, and making crafts. They have started businesses with perky, practical wives; they have become Republicans and are breeding dynasties with blonde-bobbed pearl-wearing Junior Leaguers. They have discovered CrossFit and have sweaty, musclebound sex with anything that moves. They are gay now. They have moved to China for a girl who isn’t me. They have given up love entirely and replaced it with improv comedy, which everyone knows is much worse. All of this kept running through my mind, and I felt that it almost didn’t matter that all these things were over. If the world hadn’t ended, my jail would be empty. There were no willing inmates in my prison of love.

This misery troubled me, so I summoned God.

“Yes?” he said, materializing in my living room between my spider plant and my coffee table, which was covered in coffee mugs, notebooks, and a week’s worth of dirty underwear ready for distribution.

“God,” I started. “God—first, would you like some tea?” I gestured to the cup of rooibos I was holding.

God shook his head. “No thanks. Why am I here?” He looked at his watch, which appeared to be, inexplicably, a Timex.

“Okay. Right to business. I admire that. So, the world is over. You came to me with this whole explanation about how everyone gets to decide the fate of their ex-lovers. I decided, and I got what I wanted, so why am I–?”

“Why are you spending most of your time sitting on your couch and despairing?” God asked. He glanced around my tiny, filthy apartment and I detected the faintest sneer of judgment playing on his lips.

“You think you’re the only one who gets to decide the fate of their ex-lovers?” There was something Joaquin Phoenix-y about God, I decided—something in the curl of the lips, and the gaze. Unsettled, I realized that God was my type.

“Uh…I guess that makes sense.” I thought about how I wasn’t in a tea bag, and how I wasn’t sewn bunghole-to-cooter with anyone.

“You think you’re the only one who proposed a different idea?”

At this, I nearly spilled my tea. I stood up. “Who did this to me?!” I demanded.

“THEY ALL WANTED THE SAME THING, YOU INSUFFERABLE CUNT!” God roared. He disappeared, laughing, like the Cheshire Cat.

So this, assholes, is why you no longer get breakfast. 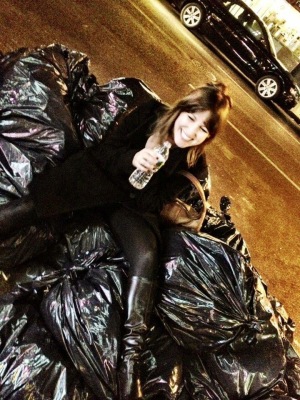 LAURA PODOLNICK DUKHON has had work published in Barrelhouse, Used Gravitrons (as Madame Joseph Stalin), The Subway Chronicles, and Progress Chrome. She co-hosted the Divulger Reading Series (2014-2016), and founded two magazines: NY____. (2011-2014) and BITEmagazine (2005-2007). By day, she has a career working at every New York City denizen’s favorite state agency. She loves spreadsheets, cities, and karaoke. She lives in Manhattan with her husband and their cactus.