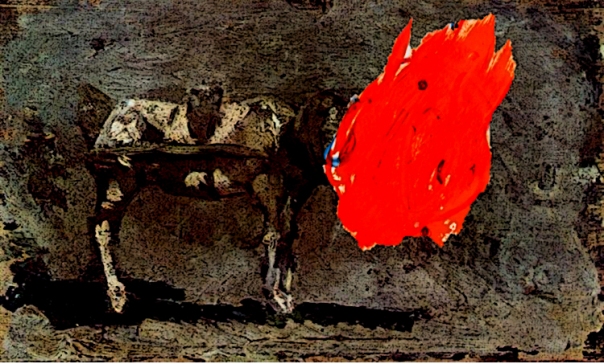 From our Winter 2018 issue, “The Headless Mule” is H. Pueyo‘s blazingly surreal flash fiction based on Brazilian folklore.

TOUCH, YES, BUT JUST A LITTLE—she said, her, the mule, the one who would stop having a head. Sitting on the church’s pew, she waited, blouse unbuttoned and skirt lifted, looking at the altar. Many things crossed her mind as he helped himself: his hands, hot like maize cake, freshly baked. The wooden cross, gilded, the thrushes outside, singing. Not a word to anybody, yes?—he said, and she nodded, blushing. How glorious it was, to be loved, again, and touched, by someone, anyone, even if it was him, even by a priest.

The widow covered herself, and kissed the tip of his nose. Will we see each other again?—she asked. Tomorrow, or the other day, or on next Sunday’s Mass?

Sure thing—he said, covering his crotch with his cassock. She leaned for another kiss, but didn’t receive any.

Outside, it was night, well, almost. It was that hour where the clouds fog the furious lightness of the day, and orange and pink turn slowly into blue, purple and black. I will miss you—she said, finger twirling around a loose curl. The priest disappeared in the shadows of the closed church.

She hid under the veil, as dark as her clothing, and hurried to leave as well.

The widow looked up, walking beneath the trees, following the path of the dirt road. Slowly, she realized something was happening to her: her weak knees hit the floor, her elbows contorted, turning, breaking. Her skirt furled around her legs, and she screamed, thinking again of the priest: if someone saw her, would he help her? Or would he turn his back on her, and pray, washing his own hands?

Help—she wanted to say. Instead, she neighed, because she wasn’t a person anymore, she was a mule. Her arms, turned tall, continued into silver hooves, that once had been hands.   The mule kicked her clothes away, trying to move: the embroidered skirt, the buttoned blouse, the widow’s veil. Help—she cried, but no tears fell.

There was no head anymore over her shoulders, only a wide, muscled, severed neck. Her soft skin, still feeling the touches, was hardened, covered in hair. And from the wound—the wound of her own neck—tears became steam, and flames whipped the night’s cool air. How did this happen?—she, neighing, wanted to yell. What did I do?

And, like the church’s beautiful, gold-coated, oppressive altar towered over her when the priest was between her legs, the realization of the truth came to her.

Her, the mule, the widow, she galloped back to the church. There was a phantom pain where her eyes and cheeks should have been, swollen, filling up with salt water that couldn’t exist. She reared in front of the stairway to call him:

The priest, hearing the shouting and seeing the burned bushes, opened the church’s gates.

I did nothing wrong—she said, but a mule doesn’t talk, she neighs. I just wanted you to touch me, to see me, this is not what I am.

Above, the priest, no, the man—because that was what he was, not a saint, but a man—raised a wood and iron cross, commanding words of order:

Vade retro, demônio!—he thundered. She felt no power over her, but she felt his disgust, and, again, she remembered his hands over her.

Faltering, the widowed mule stumbled back to the dirt road, alone, under the same moonlight that took the monster out of her. Smoke surrounded her neck, and she loped, hoping he would have the same punishment as her. Those were his hands, not hers, on her body, not his. Why me?—she whimpered.—It’s his sin, not mine, why won’t he help?

Before dawn, the mule arrived at her empty house. Her weak legs allowed her to rest, the hooves softened into fingers, the fur turned into hair. The widow closed her eyes, and, with no memories of the cursed night, she thought of the priest again.

H. PUEYO is an Argentine-Brazilian writer and translator. Her work can be read in venues such as Strange Horizons, Clarkesworld, and The Dark Magazine, among others.