A vision of roadkill gives life to some wonderfully psychotropic short fiction in “Dead Squirrel Oh My Soul,” one of two pieces by Caroll Sun Yang in our Spring 2017 issue.

Jesus, don’t want me for a sunbeam.
Sunbeams are never made like me.

IS THERE NOTHING SO EXTRAORDINARY ABOUT ROADKILL? Today, I have taken the exact measure of java, carbs and psycho-tropics to be able to keenly observe that this squirrel does not look dead but rather in slumber. An earth-colored body unmarred, at rest with a bushy tail curled slightly in, sharp-tipped paws laid upon each other as if in lazy prayer, a round frog belly covered in a down of cocoa-cream fur, overgrown teeth in a surprised mouth, slit wet eyes and such bitty folded ears pasted against its head. If I scream, will it hear me?

Los Angeles’ sunlight is stark, with a pale topaz gleam that provokes a suicidal nerve. I felt it many Augusts. Sometimes you will come out into this luster, from within dank dream-infested apartments or sprawling pseudo-Mediterranean abodes or any of the ill-composed habitats between and blink many times in an effort to calibrate self to such exposure. Blink, red behind the lids, blink, white, blink sunset, red-orange, white, blood oranges, white, tracers and floaters, veins, pomegranate, blink, open blue, blink… Thick polluting dust and the molecules of deferred hopes might take you. Sometimes that dazzling light plus the babble of traffic, daytime neon, alarms, vendors, construction, birds, elevators, footsteps, chewing, whispers… mated with the smell of tar and industry and perfumes and decay will deliver you straight to panic.

A poisonous sun shines hard on our dead squirrel, stiff rays push through a.m. clouds and smog. A religious feeling light spills over the beast, like it is a Virgin Mary in a master painting. The squirrel has a mother, as all must. A juvenile death is incorrect, even in the case of a peanut-brained mammal; premature death steals opportunities for action. Actions like falling in love, breaking up, falling apart, giving seed, taking seed, trusting again and slowly not. Imagine this rodent, before the vehicle met him, doing what it knew instinctively to do. Forage, collect, store, mate. It had innate sense of beginnings and endings. Begin spring. End spring. Begin summer. Reproduce. End that. Start fall. Collect like mad. Store. Feed. Reproduce. Spring. An ancient rhythm.

Let’s conjure a mop-headed, gangly child all ribs and clavicle stumbling upon the brute in the road. First he will peer at it from many angles, then he will dare to poke its freshly dead body with twigs, soon comes the urge to throw rocks at it, but he will begin with pebbles and end with thin slabs of loose concrete. All of this experimentation still leaves the beast whole. Soon the boy will feel the need for a ceremony or burial of some sort. Harass a weaker thing to finally put it to rest. That is the naked morbidity of children. That is the clothed, tucked in morbidity of a civilized us.

The child will deposit the darling body on a makeshift stretcher fabricated out of a crumpled Twix wrapper, gum and young branches. He will bring it into his home. Since it is not bloody and mangled with innards out, mother agrees to a funeral. Mother and child will wait until father returns home after his long day at the office or studio or wherever it is that some fathers hide. After he swigs his iced whisky, just to booze off the grime of downtown, they seek out a safe spot to bury the feral mute. They will lay the soul in a shoebox lined with aloe soft Kleenex, shards of pretty broken glass from the gutter, bright red poison berries and nuts. Mother, father and child will form a circle, a triangulate really. Father will say a prayer; drop a peanut on its bloated belly, and joke – “Here kid, one for the road.” They will dig a hole deep into wetness, which will smell like whence we came. They will lower the flimsy coffin into the burrow and fill the void with rich, fertile USA dirt. The boy will murmur a spastic prayer, one that neither requests nor thanks but ends in a strong Amen. Lacking a developed sense of grief or respect for mortality, he is already bored of this game by now. The nuclear unit will disperse like magnets repelling off of one another.

Dusk settles in for her shift. Blues bleed lavender rage orange cry peach and so many feeling shades all bow to a watercolor black as mother stews over the clang of pots, fragrant meats, and echoes of dinner hour game shows. Succulents and flourishing ferns frame her. Cats stretch in footprints. Boredom looms. Everything is hungry.

They dine to the sound of applause.

Mother sends the son out. Now she will muster nerve enough to confront her mate with an age-old query. She is grasping at any form of passion; her beautiful ardors are extreme and must be expended somehow. Cherish her tense, padded body in a pretty dress with kitchen steam moistened tendrils, ringed fingers fluttering at her veined neck, feet apart in a warrior stance, as she asks,

“Why are you so insensitive?”

“Good god woman, now what?” Father will mutter as he rests on his side, head cradled by a tropical vacation inspired pillow, full-bellied and bloodshot with dirt under his nails. They live in this modern home that years ago promised cum-sticky rumpled sheets, boisterous backyard parties and well-behaved pets. Traces of the scent from whence they came linger as they wait, hoping to feed on one another’s dredged up love scraps. There are rare moments of laughter, real tenderness, and emotional kindling. So they stay, hoping for flames, some enlightening chaos to end all ennui. Their bodies stay.

“You know, the one for the road remark was tacky. When something dies you should honor its passing, not make jokes. Don’t you want to set an example?”

“Honor roadkill? Well, I thought it was funny. Sorry I like to laugh.”

“Everything is a joke with you. Do you even care about anything anymore?”

“Really? Do I care? Do I fucking care about how this family will live and die by my job, how if I don’t bring home the fucking bacon, all of this will be pulled out from under us, and oh what a lot of nothing it really is. Is this all? I don’t care about how each day I feel like my insides are going to shit? How I come home to you and the boy and still feel alone and I don’t fucking know why?”

“So you care about yourself. Just you really.” Long pause.

“Yes. You are right. I care about me. I’m sorry I matter. Now, will you please lay off woman? My day was long, as long as yours.” He rolls over to face the back of the couch, his face pressing into the rich fibers, the smell of backs, and the floral print that he cannot see. If you can’t see you can’t be, his child once warned.

“They warned me. They all warned me.” Her many days of built up and frustrated woman tears conspiring to blow, pressing into her sinus and choking up into her throat. How beautiful is a woman’s tired and trembling mouth. What hungry air is expelled? Sour like milk. All of the air around her held hostage by crucial female hormones, fiery auras and ancient frustrations.

“What? Who warned you of what? I loved you always. I love you now. I do care. I fucking do care. It was just a little joke.” He mumbles into the crack of the couch where keys and coins and jewels and slips of important paper disappear. He is ragged from the hunt. He is hugging a feather pillow tight. Floating away.

He is too tired to follow. In his head he will tell her to fuck-the-fucking-hell-off. They share nothing with the other except air and a maze of rooms. A son. Their pulses and warm bodies, doe eyes and flush lips, gestures and words—all that could have broken each others’ hearts once upon a time, put each other on the ground in supplication, caused doors to be busted open and hand mirrors to be thrown shattering mid-beautification, are incapable of that anymore. You have to love something wildly to be broken by it. Does time take the wilderness out of everything? Screw time then. then.

Tonight the moon is slim and many stars shine down, a vital light, a glowing salve that settles the nerves of day. Under this sky, surrounded by the sweet sorcery of primrose and crickets and the smell of dug dirt, is their son. He is in the shed playing a round of marbles with a young girl, and they bloom. A lantern lights their way.

“I buried a dead squirrel today. It was kind of funny.”

“How did the squirrel die?”

“I don’t know. I found it in the road, like it was sleeping but not.”

“Poor thing. Was it still cute?”

“Okay just a little one. I don’t want tongue yet okay? But wait, why was it funny?” Taking a kiss, with a fresh darting tip of tongue. Was that tongue? She wonders and hopes yes.

“Can I see them too, you know, yours? Just real fast?” His eyes search her chest.

“I have never seen real ones, just pictures.”

“No, I mean, why was it funny? The dead squirrel.” She is lifting her shirt up slowly. The lower part of one breast is revealed, a glimpse of nipple too.

“I don’t know. Just was. But I think you are really pretty.” He stammers, his small heart thumping through his shirt. His hand goes to her and cups a small curve, to find she is warm and terrifying.

“Oh. Thanks. You’re funny. Funnier than anyone.” She inhales a little sharp.

“I am? Thanks. I like you a lot. You are the nicest.” He exhales slowly.

A dead squirrel can bring all of this language about, even though the wilderness of it is gone. What is reincarnation? I am asking. If it is lucky, its bones will be unearthed years from now, when the property changes hands and some other child will tenderly reclaim what the world cast upon the road. Warm tap water will pour over all of the tiny bones so intricate, each crevice filled with dirt. Mother’s sink will be muddied. This will be a gorgeous find for the child. She will lay it out to dry in that vicious sun and adore it. She will put it carefully in a Ziploc bag, wrapped in silk and tinsel. There will be something lovely about the shrouded bones being held in clear packaging, evidence of a life that once was. Sometime later, the blooming girl will trade the bones for a bag of cat-eyed marbles, Mountain Dew flavored lip-gloss, or perhaps a little weed. If I scream, will she hear me?

Squirrel: Common name for rodents of the family Sciuridae (from Greek skia “shadow” and oura “tail”; “tail that casts a shadow”). 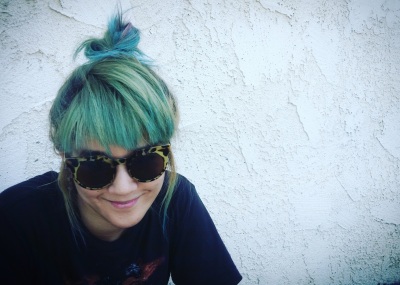