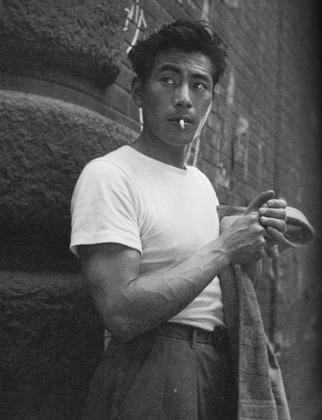 The grand finale of our Summer 2016 issue is Luis Galindo‘s nefariously groovy poem “The Prince of Darkness is cool, like Toshiro Mifune.”

I WAS DRIVING
a yellow Monte Carlo with a dark blue door
on the passenger side.
It had diamond tuck and roll interior
with eye of Horus buttons.
The prince of darkness asked me for a ride
to the corner store.
He was out of Kools and matches.
He wanted a Pepsi.
He looked like a Hispanic Toshiro Mifune.
He wore silver mirrored sunglasses,
a Foghat T-shirt,
black Levis and baby blue
snakeskin huaraches.

“Let’s roll, papi” he said
and tapped the blue door
with his fingernails,
long metallic grey talons.
I could hear him drumming along
to the song on the radio:
“The Cisco Kid,” by War.

“So what should I call you?” I asked.
“My name is Lucifer but they all call me Chato,”
he said in a low voice, sweet as raw honey.
He was sucking on a blue glow-in-the-dark lollipop,
it crackled and hissed when he took it out of his mouth.
His tongue, an electric eel, undulated and sparked.
He smiled like Conrad Veidt as he hummed.
His slick black hair was combed straight back, perfectly.
Behind the whites of his eyes were miniature angels
screaming and weeping, mouths agape
like mimes in an invisible box.
Their wings, ashen and fluttering like moths.
Tiny holy prisoners behind Chato’s eyes.

We made it to the store and I parked.
“I’ll be right back,” he said.
I waited, the Yellow Monte Carlo
engine rumbling like a hungover dragon.
Chato was walking out of the store
packing the Kools on his palm,
with each tap of the box against his flesh
a puff of smoke appeared and a deep hum of energy
sent vibrations through my spine-
like the first time I got high,
or the first time I saw a woman’s breast,
primal tremors of awe and wonder.

The guy from the store ran out and said,
“Hey, Chato, you forgot your change.”
“I never change,” he said with a nuclear smile.
The guy from the store laughed as his skull
ignited into pink flames.
“You got that right, Chato. Peace, baby,”
he said as he slowly ambled back into the store,
his skull still roaring with pink fire.

Chato said, “Take me to Alma’s house,
it’s on Equilibrium Avenue.”
He lit a Kool with his index finger
as a miniature thunderstorm
appeared in the backseat of the car,
all terrible lightning and wind.
We made it to Alma’s
where two large men covered in tattoos
were working on a black Lincoln Town Car
in the front yard.
They had no faces, only eyes,
eyes like rubies in pie pans of asphalt.

Alma walked out of the house.
She looked like a Mexican Bettie Page.
She leaned on the door of the Monte Carlo.
Her hands came inside.
She had RAGE and FURY tattooed on her knuckles.
RAGE on the left.
FURY on the right.

She was smiling wide.
Each of her teeth were made of gold,
each one bore a mystic rune.
I was about to ask what her teeth said
when Chato got out of the Yellow Monte Carlo
and let the blue door slam.
“Here’s my card, call me
if you ever want to talk business,”
he said as he winked.

The smell of diesel and roses
wafted through the air
as he and Alma
walked inside.
I looked down at the card.
It was a hologram with flaming letters.
It read:
Do what thou wilt, it’s the law. 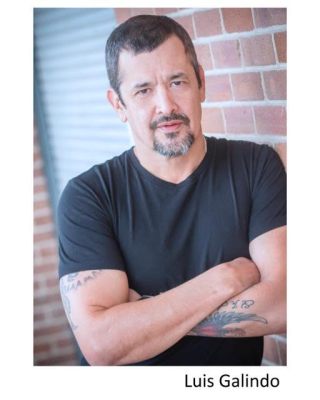 LUIS  GALINDO is a teaching artist for the Alley Theatre in Houston, Texas teaching poetry and Shakespeare to local schoolchildren and young men in juvenile corrections.He also works as a professional theatre actor and Anime voice over artist. He’s been everything from a Texas pipeliner and offshore oil rig worker to a NYC bartender. Luis is the author of two collections of poetry and prose: Electric Rats in a Neon Gutter and the upcoming From Juarez to Damascus. He believes in alchemy, rock and roll and the power of the word. He received an MFA in classical theatre performance from the university of Delaware Professional Theatre Training Program.