THE ORDER OF THE THINGS WAS TO MAINTAIN UTMOST PURITY. The obsession so pathological, neurotic, crazy and fanatic and infused with a hyperbole stretched so far that it laughed at its own ridiculousness. Purity: A non-existing black hole, milk curdled with sourness and floating in whey—undefined, disbanded, scattered. A bad joke constructed to collapse on a passer-by. That’s why when she was told she needed a “pure” box, Gita simply threw a fit. She slapped that woman Mala on the face, pulled her from the cushy chair and dragged her out of the house.

“I swear I can help you!” But Mala was standing on the porch by now. As a woman, that word exploded a bomb within Gita, its hidden connotations angered her. But it had to be found, the pure box, it was important for her survival now. The dew drops of reasoning cooled her head and she thought about it calmly.

“Do you mean anything that can be touched, felt or seen?” But it was not the box she was talking about.

“That’s right.” Mala was back again on Gita’s invitation.

Because the bigger problem than finding a pure box for it was to know whether what she wanted to sell was eligible at all. A person’s voice could certainly not be touched, felt or seen. Not in orthodox ways at least.

“Of course it can be!” Mala pressed Gita’s hand, as if trying to squeeze a nod out of her. “Watch this.” She made a small ringlet with her lips and emitted a sound. What started as a hiss and developed into a whistle became a roar that could not be likened to any sound that existed on the planet. Like a flute that starts off easy and loses its temper. That sound broke a few glasses, invited bursts of loud and nasty comments from the neighbors and proved its point. “You see what I mean?”

But Gita was unconvinced. A wave sneaks into your brain through a tiny, inverted, snugly fitted loudspeaker in the ear canal and unsettles sleeping toddler-like tiny hair. Result? Voices you hear. How can a thing like that be touched, felt or seen? Gita continued to argue within herself and out. “But you know, I would say, even sorrow, happiness and anger are more tangible than voice. What did you sell?” Gita picked up a biscuit and bit on it with her slightly protruded teeth, wanting to really hear than be heard.

“Well, it was in high demand back then. Now everyone has it and no one wants it. They even have software.”

“No.” Of course not. Hatred can’t be infected with love. Hatred, like poison, turns everything into itself.

“Sell it if you need to, you will get a good price. Don’t hold back.” Now Gita definitely needed a pure box for her voice.

The box, the box, the box—Gita’s mind chanted as her foot moved to the rhythm of her thoughts. Mala had to take leave for a life that did not involve Gita. Gita was alone now.

The box, the box, the box, Gita bit on more biscuits as her mind dropped ideas in a basket. It tired her! She switched on the TV and stared at the flickering lights. She liked the evasion of responsibility that came with watching TV. She could choose to have nothing to do with the dying men, bombings, starving people, floods, droughts, earthquakes that happened in a faraway world outside her window. The men, women, burgers, hyenas, babies, buildings, trees melted into each other like a long, abstract movie with no narrative.

“Could it be something I have never used before?” This was Gita’s tenth phone call to Mala. Mala had now resorted to saying pretty things. Things that Gita wanted to hear. The words had now hardened with sugary glaze and were meaningless. Yes darling, do that honey, don’t worry about it, why don’t you.

Gita looked outside the window, the wind woke up the sleeping leaves with its force.

“If not purity in the real sense of the word then what is it that really matters?”

“Real sense of the word?”

“Yeah, I mean wash it under running water and rinse it with some alcohol?”

“No, no love. Think about it. Think harder.”

She thought harder, as Mala had suggested, just as a person walks faster on a whim—exerting the mind and the body to execute. She scanned each and every corner of her memory palace, flinging things to look under them, lifting mattresses, upturning glasses, dusting coats for that answer because it could be hiding just about anywhere. She looked all around her. Sometimes a vision of things triggered some part of the brain that led you to answers—she wanted to try that. Even food helped sometimes. She drank some water and then some coffee and then some cola with ice, without ice, ate some chips and then some cough syrup and then an aspirin. Nothing. She even walked up to the window to look outside, but for the fear of losing the scale of things she didn’t pull the blinds. But what she could do and did was look up and down the window. Nothing. She tried talking to herself. Where is the box? Where could it be? Why do I not find it? No one answered. She looked harder. In the textures of the wall, the reflections of the mirror, the shades of the windows, it could be hiding anywhere.

And then she saw it. She saw it sleeping over the dressing table. It radiated a sort of aura that was now absent from most inanimate things of the present. It belonged to a time that had ceased to exist. It was a sandalwood case the size of a ping-pong ball, shaped like a dew drop. Gita lifted it like one lifts a newborn, with love and care. It still had vermillion powder in it. It was given to her by her mother, to be worn in the parting of her hair when she got married. But it still lay there, unused and untouched, holding the hopes of her mother. She should have felt despair and shame because she had let her mother down. But she did not. She emptied the contents of the case like it meant nothing. As if things could shrug the value of memories if you attach enough reason to them. It was time to replace her mother’s hopes with her own. Without any further delay, she placed her voice in the box and set out for the place that would buy it. 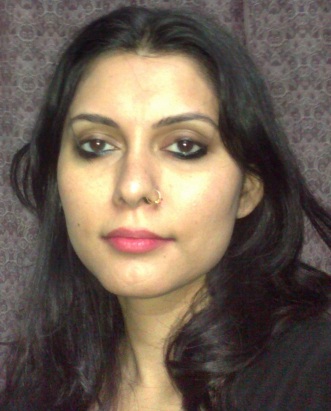 KALPANA NEGI drinks lots of coffee and likes to run when she can. She lives near Memphis, Tennessee.