The Venus of Willendorf’s body is not something to be used to make a point in “Amiss and Amok,” one of four lyric essays by j/j hastain in our Winter 2015 issue.

THE VENUS OF WILLENDORF IS PLAGUED with a peculiar but befitting dysphoria. Afraid of her aesthetic shifts ever being misread by others, ever being used as cultural stigma in support of any form of reductiveness, she is impassioned to emphasize: “Nothing in these shifts, nothing in this weight change, this weight loss, is indicative of anything lost.”

She is not trying to lose weight. She has just been more into root vegetables lately. Her weight loss is not meant to be a message or a future measure regarding the female form for generations to come. Her body is not something to be used to make a point. Her hands grab her own belly fat with a ferociousness that is familiar with itself. She is a living state; she is the summation of her skills at work to elaborate bulk.

She pulls her belly fat toward you and states: “I am still here for you in the ways I have always been. The path clots, congeals in certain areas before shrinking and settling back into itself again.” Fluctuations of the body are its valor. The drama in which to attend and attune is the enlivening and making-more-subtle of the body before it becomes entirely stone.

“Do you realize I can’t stand on my own? There is no upward state for me, without you in me, relating to me accurately. I depend on your hands wrapped around me as you keep me upright while taking me with you into battle as a reminder. Transition is heavy. Any misinterpretation of me could very well be the death of me, could cause me to crumble in your hand.”

Regardless of what is seen as happening on the level of my physical form, I remain an extreme, an indelible-obesity. Revel in that fact in your third eye, please, if what your human eyes relay is confusing to you. I would rather have you see me with your eyes closed than to have you misread me.

The carnivorous voles are running and squealing in the expanse, as additives to the undersides of my slow-moving gait. This is a performance of unconditional obeisance. Add to me and be with me. Together we will increase amok. 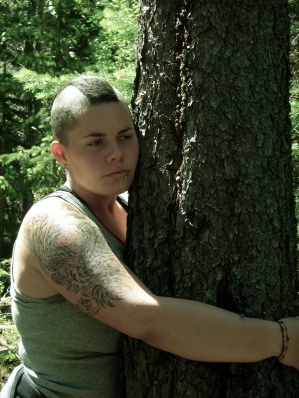 j/j hastain is the inventor of The Mystical Sentence Projects and is author of several cross-genre books including the trans-genre book libertine monk (Scrambler Press), The Non-Novels (forthcoming, Spuyten Duyvil) and The Xyr Trilogy: a Metaphysical Romance of Experimental Realisms. j/j’s writing has most recently appeared in Caketrain, Trickhouse, The Collagist, Housefire, Bombay Gin, Aufgabe, and Tarpaulin Sky.