From our Winter 2015 issue comes “The Broken Arch,” Reshad Staitieh‘s brief but powerful snapshot of two young brothers trying to survive in a treacherous land.

“WHY WASN’T SHE HOME?” His brother says.

Diyam hears small toes scraping at linoleum and imagines trails of dust left in their wake, like the slim tails of comets.

“Greetings,” Diyam calls from the freezer.

The restaurant sign promised buffets with “well-known” dishes. It’s been three days since they’ve eaten. He hoped there would be pie.

There’s a room in the back of the diner, storage or a freezer. It is the tenth like it in two days.

“Yeah, I got it.” Esam answers after pausing and taking a short breath. “It doesn’t look anything like it anymore.”

“What doesn’t look like what? Be specific.” Diyam speaks through the steel doorway. The generators died, and the cold is gone. There is nothing left but heat.

“You mean the arch?” Diyam corrects. He scans the room. He smells mold and knows with well-honed instincts that food is nearby.

He is a true scavenger.

“What’s gateway to the west?”

He closes his eyes to trace the smell’s source. “That’s the arch.” Although he cannot see him, he imagines Esam pointing with his nose to the incomplete parabola. It is broken tusks. Esam is a shadow of disappointment.

Diyam looks to Esam from the back room. Esam holds a postcard, worn with the unmistakable signs of a long journey. If he tasted it, he would taste dirt from Indianapolis, Dayton, Columbus, and Allentown. He might taste home.

The card’s white borders read like a soot-covered growth chart. Its edges track the changing size of the pubescent hands that hold it.

Someone drove a pencil through the center of the arch. Esam looks through the hole, distastefully, like he would a broken kaleidoscope, turning the card, trying to alter the shattered image on the other side.

“Not anymore. No.” Diyam returns to the fridge and boxes.

He kneels over two hat-sized boxes. He doesn’t recoil at the smell. He licks at the scarred surface of his cracked lips.

“Auntie was supposed to be there. You said she would be there,” Esam says.

“I know what I said, but things change sometimes. She left a note that said to wait here for her.” There are other words on his dry tongue, comforting words, brave lies he can never tell because father taught him better.

“But where is here?”

“The city. St. Louis. We’re waiting for her now.” He hears scurrying in the dusty rafters above.

Diyam finds no comfort in the quiet that follows. He holds his breath and listens through the silence. His spine cools and the coldness spreads through his shoulders. His arms, then his hands. He makes a tight fist and shivers with fearful premonition, still a child, scared and hidden in the cabinet.

He knows their portents: the fresh tracks and oil stains in the empty parking lot in front of them, the screams that lingered in the vacant streets when they entered the city, and the scarecrow corpse that hung from the highway marker, all omens ignored.

Diyam knows they will come. That they won’t stop coming. The others, dark remnants of a past he never knew.

Diyam doesn’t answer his brother. Hunger drove him there. He returns focus to the one thing he can control, protect. His thoughts return to bounty and sustenance. He mouths a word no one can hear, “Bismillah.”

He lifts the box lid.

He leaves the pie and walks to the counter to search for forks and plates.

“I know. But give me a minute. I think I’ve got something you may like.”

“Is it pie?” Esam says from his perch.

“You have to wait. Remember…”

“Now, grab some napkins.” Diyam tries to hide his excitement under a mask of mature composure. His father’s face.

“Get the plates.” Diyam walks back, faster this time, and steadies himself above the pie, the golden treasure.

He’s midway to the counter when he notices a leak from the box edge he holds. A crimson trail with white berry speckles leads to the fridge behind him. The dripping intensifies with each step forward, becomes a stream of red, and the soggy box bows with liquid tension.

Diyam glances at his brother. He sees black bags under hollow eyes and the desperation that clouds his living mirror. He watches tears well up around them when the pie escapes from the moist cardboard.

He hears a voice cry out as the pie hits the floor.

Diyam unwittingly steps on cracked porcelain. Dull glass punctures the thin sole of his road-worn boot. He can’t cry because his brother is crying. And Mom told him he must be strong.

He quietly bleeds into the dirty filling.

Engines thunder beyond the picture window and interrupt his brother’s wailing. He was right. Diyam hasn’t heard engines since his parents were taken. But he remembers the heart-numbing sound.

Esam cries through the confusion, but Diyam rushes to stifle the sobs and pulls him to the ground. He peeks from the window and sees them coming: countless others, tearing through the lot.

Diyam squeezes his brother’s shoulder to comfort him. He is tired of running, of fending for scraps. In the desolate diner in the fifth state of charred ground, there is nowhere left to hide.

The others’ engines stop feet from their perch. Even from inside, Diyam feels like he can smell the now familiar iron scent of blood on their clothes.

Their time is too short.

“Who is that?” Esam reaches for his brother’s hand. Diyam wraps his thin arms around his brother’s, his hands completing their union, an arch.

“Will she have pie?” 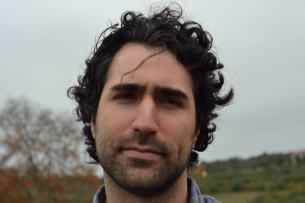 RESHAD STAITIEH is from Kansas City. He resides in Washington, D.C., where he daydreams of barbecue, shorter commutes, and more time to write. Reshad is a practicing attorney, dungeon master, and musician. His work has appeared in The Colored Lens and  Betwixt.