There’s an uncanny dream-logic at work in Carl Fuerst‘s “We Dream Of Our Dead Pets” (from our Fall 2014 issue)– but is it actually a dream? Or could it be an irregular reality caused by galactic cannibalism? All we know for sure is that this surreal little story has burrowed its tiny fangs beneath our skin and we can’t quite yank it out.

I DROVE ON THE ROAD THAT CIRCLES THE TOWN where I live, an island of crumbling low-roofed brick buildings surrounded by countless miles of cornfields. Once, three summers before, on a late summer night bordering on an early summer morning, I stood on the balcony of my second-floor apartment and watched the cornstalks in the rising sun, anticipating the brief and unpredictable moment when the new day’s light would make the leaves look like emeralds heated to their melting point and hammered flat.

Since then, I’d been in my car, and a small part of me was starting to wonder why it had always been night.

I took a road into the cornfields. It had recently snowed, and the roads were dark, snowy, icy, and bad. A blurry, white-robed man hunched by the road’s shoulder every few miles. Whenever I passed, he strained towards the car, snapping his jaws and howling, some invisible force dragging him in the direction of the fields.

This made it difficult to listen to my passenger, who reclined in the back seat, smoking a joint and staring at his phone’s glowing screen.

“See, stars form when gas inside galaxies becomes dense enough to collapse,” he said, “usually under the effect of gravitation. But when galaxies merge, see, it increases the random motions of their gas-generating whirls of turbulence, which should hinder the collapse of the gas. Intuitively, this turbulence should slow down the formation of the stars, but, in reality, the opposite is true.”

“Do galaxies collide often?” I asked. “Is this something we should be worried about?” It was nice, for once, to think about something besides the reasons why I couldn’t remember when I wasn’t driving in circles around the little corn-town where I lived.

“It’s very common,” said my passenger. “But ‘interaction’ would be a more accurate term than ‘collision,’ accounting for the extremely tenuous distribution of matter in galaxies.”

“Meanwhile, galactic cannibalism happens when a galaxy, through tidal gravitational interactions with a companion, merges with that companion, resulting in a larger, often irregular galaxy.”

My car skidded off the road and down a steep hill and rolled to a stop on a farm pond’s black bank. I got out of my car and snow spilled into my boots. The pond wasn’t frozen. I watched icy water lap at my front two tires.

At the top of the hill, pickups crowded the road’s shoulder. I was far from town, where nothing and nobody ever is, so I went up to see what it was all about.

The trucks’ engines were running and their lights were on, and I heard men and dogs bark in the woods. Lantern light slashed through the dark.

Short-legged, long-beaked birds strutted along the shoulder, pecking the snow. They wore metal bands around their ankles, with tiny transmitters attached to each band.

A man leaned against a truck’s tailgate, shining a flashlight into the woods. He wore the plaid-and-flannel of hunters in illustrated children’s books.

Something happened in the woods, just beyond our range of vision. I can’t remember what it was, and I can’t imagine what it might have been, but I was overcome with the feeling—an unfounded certainty—that we were actually indoors.

“How long have you been hunting?” I asked.

“Longer than we planned.”

“What’s holding you up?”

“It’s the chasing and the wounded things and the crying and fighting and always being hungry….” He trailed off. He wiped a tear from his cheek.

I played with the cigarette lighter in my coat pocket. When I flicked its wheel, it sparked not fire but warm clouds of microscopic birds.

“There’s a band I like called Nightshot. Do you know that band?”

“No,” I said, “but I live across the street from the bar where they play.”

He nodded, and it was understood that we’d always meet at that bar only after having a dinner of gray steaks, hash browns, and day-old coffee at the truck-stop restaurant in the town where I lived. The meals we’d regularly have together there would be a welcome routine in our otherwise unpredictable and lonely lives. After dinner, we’d usually go see Nightshot and, after that, we’d go to our apartments to drink scotch and listen to old records. Our friendship would be challenged when we both fell in love with the same big-minded and hard-hearted woman (not that she’d be interested in either of us), but this conflict would pass and our friendship would endure, changed, maybe in a weakened state.

The dogs came out of the woods all at once. Dozens of yelping knee-high hounds, caked with blood and mud. They urinated nervously on trees and scrub and they shivered against each other. Tails between skinny, muddy legs. They bolted into the kennels stacked in the beds of the trucks. All except an old beagle with a big sore on the center of his forehead. The sore blossomed like a festering rosebud. The beagle could barely stand. He whimpered against my shins.

I knelt and kissed him, carefully avoiding the sore.

“I keep expecting that one not to come back,” he said. “He keeps coming back.”

I lifted Petey. He was like a bag of dried leaves.

“Do you mind if I go see that band tonight?” The hunter removed his cap. “What I meant to say is that, if I see you at the bar where Nightshot plays, would you mind that?”

Somebody took Petey away.

I went to my car and found another dog in the driver’s seat. It was the size of a riding lawn mower, with fur that was white and clean. It had muscular shoulders and a serious stare.

I pet it. Its fur was cold and sticky, and I wiped my hands on my jeans.

It bit me on the arm. I kicked it in the belly and pried its jaws and threw it into the icy pond. It swam back and bit me again so I kicked it away. I ran to my car but it was already inside, and I was too scared to get in or to try to convince the dog to leave.

I walked back to the trucks, but the hunters were already gone.

Astronomers have estimated that our galaxy, the Milky Way, will collide with the Andromeda galaxy in about 4.5 billion years. The Andromeda galaxy contains one trillion stars, and the Milky Way galaxy contains 300 billion stars, but, when this collision inevitably occurs, the chances any of them actually colliding is next to none, mathematically speaking.

I climbed back down the hill and went to my car, where that dog reclined in the back seat, and I opened all the car doors and crouched in the snow, blowing into my hands and waiting for that abomination of a dog to get out. I knew, I knew, I’d be waiting for a very long time. 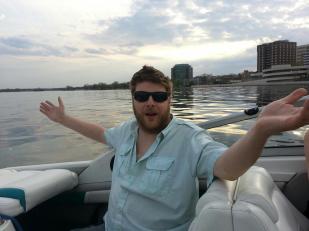 CARL FUERST is the head editor of The Breakroom Stories, an audio journal specializing in strange fiction. He is also an editor for The Again, an illustrated magazine of odd tales. He lives in Wisconsin, and many of his stories have appeared in many print and online journals.