Individually, j/j hastain and Juliet Cook have contributed many flappy lits to our weird little zine over the years…but it wasn’t until our Spring 2017 issue that we finally published a collaboration between these uniquely gifted writers. Please enjoy their magically bizarre poem “Never Be Stuck” from FLAPPERHOUSE #13.

NOT PART OF A PRIZE
fighting game.
Not part of a dog
fighting blood bath
that ends in death. But essentially
part of what it is that keeps
the world apart from itself. Take
a bath, throw in copper pennies
to see where they flow towards.

I know you’re afraid one of them might try
to attach itself to your eye,
but that doesn’t mean you’re dead
already. It means it is trying to make you
sing opera or howl
at the drain. Watch the lacerated
hair fly into symbiosis. Watch the hair
coming from her lovely wart
begin performing tattoos on
unsuspecting passersby.

The tattoos might grow
into tuberoses, rampions exploding
out the hair of a new Rapunzel
who will never be stuck in a tower.
The trapdoor shower shows us all
a discernible way home,
strand by strand, flying up
to the new hybrid magpie nest.
Even if you’re missing an eye,
all of the empty holes can be named
and with each name,
some unexpected
reverence renewed. 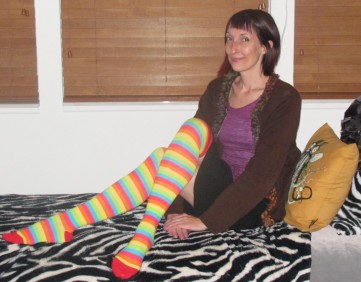