An acquitted killer finds himself stalked by guilt in “The Shadow’s Insomnia,” Shawn Frazier‘s dark & powerful story from our Winter 2017 issue.

AFTER SIX NIGHTS OF INSOMNIA, I SAW THE SHADOW. It appeared on the paisley wallpaper of my bedroom, as black rings transforming into a pitch black child-size figure. It stepped off the wall, tip-toed on its black cat feet, and sat on the edge of my mattress. Then, as if seizing control of my thoughts, my mind filled with memories of the black boy I killed: his screams, his blood pouring onto my manicured lawn, where my new SUV was parked in front. His opened eyes staring out of a sleeping face.

Fear paralyzed me in bed, though not enough to stop me from moving. I willed this charcoal illusion to return to the wall where it belonged. What right did it have to invade my space like this, to forcibly remind me of that boy? I was found not guilty by a jury of my peers. All I wanted was to keep intruders from burglarizing my enclave. I knew every-one who crossed through our front gate.  How was I to know this boy had friends here?

The shadow returned to the wall.

I shook myself awake and jumped up, thinking my insomnia was playing tricks with my head. I turned on the lights and touched the wall to see if I could feel where he— “It,” I mean— went…but it had vanished without a trace.

In the morning, on my bedroom bureau, I saw a photo of my grandmother crying. She was not crying before.

My friends and family have kept away from me. Frightened of my story. How I acted. Jumping at shadows I see on a wall. They thought I was losing my mind.

Was being alone really becoming so scary for me?  No—this phantasm manifested from my lack of sleep. I prayed before going to bed that this black boy—I mean shadow—would soon be nothing more than another bad dream. And would go away.

But at night, it returned. It floated across the carpet, passing right through my TV set, picture frames. In a photo of me, where I once flashed a gleaming white smile, I now sulked pitifully.

When it passed through my flower pots, the leaves dried up and shriveled, and the petals fell to the floor. In the kitchen, I heard the refrigerator door open.

I played Beethoven—“Moonlight Sonata,” hoping it would ease my mind, relax me, raise my spirits, banish this black beast stalking me. But the music, my favorite music, brought me no joy, and the shadow remained. I heard it in my bathroom, flushing the toilet and running the water from the faucet.

I decided I’d leave my house and go to a bar, thinking my old friend Jack Daniels could dull my suffering. I sprayed some Brut on my neck, not so much for others to smell, but for myself. This had been my father’s cologne and that scent always awakened happy memories…but none of the childhood feelings of home returned. Just a hazy, gray fog filled me.

During my first drink at the bar, I began to feel ill, like coming down with a nasty cold: sneezing, aching, nose running like mad. I was coughing so hard; I was spitting yellow phlegm. Some got on the bar before I was able to grab a napkin. I went to the men’s room and was appalled at what I saw in the mirror—my eyes were wide and dark like a raccoon’s, and red streaks surrounded my pupils. How did I not see this before?

After I came out of the bathroom, the manager asked me to leave.

When I got home, the shadow was sleeping in my bed.

My health returned. The coughing and all my other symptoms ceased. I stared at the shadow, watching its body reverberate from snoring.  It turned over, never noticing me standing there. So quiet and peaceful, it was. Was this why I felt ill?  Did I leave a part of me here? I crept toward the shadowy creature and gently placed my hand over it. It sat up, angrily brushed my hand away, and went back into the wall.

Later that night, I saw it sitting at my desk. The desk was cluttered with newspaper clippings and folders from my trial. The shadow stood and loomed over me with the hideous void of its black face. Smoke came from where its nose should be. The neck tilted sideways. He knocked over the folders. I moved to snatch the documents and put them away, and when I stepped on one of the articles’ headlines, it stabbed my sole like broken glass. I jumped back into bed, hiding my head under the covers. After a few minutes that felt like hours, I peeked over my bedsheets and glimpsed it move into the bathroom.

I was too frightened to leave my bed.  The shadow opened and closed the front door. I quickly got up and bathed the house in bright lights.

During the day, I noticed that the colors around me were starting to fade– first the browns, blues, yellows, and greens, then everything else until only grays surrounded me.  I feared I’d soon lose my whiteness. Become dingy like the shadow.

I found an empty orange juice carton in the refrigerator and a cereal bowl on the kitchen table. Half-drunk cup of coffee beside a carton of cream and a sugar-coated teaspoon. The air smelled of eggs and toast. A frying pan sat in the kitchen sink. In the bathroom, towels were scattered on the floor, water dripped from the faucet, soap-foam hung on my shower curtains.

From the dark, I heard movement in the wall. It wanted to hurt me this time. But I wouldn’t run. This was my home. I’d get rid of this thing, like killing a rat as it runs across the kitchen floor. I arranged pillows under my bedsheets in the shape of me sleeping. In the closet, I waited with my flashlight and a newly purchased 9mm semi-automatic pistol.

The shadow child tip-toed toward my bed and hovered over it. I quietly stepped out of the closet. A pointed knife-like object crashed down on my pillows. Feathers flew into the air, and floated. Quickly, I shined the flashlight onto the shadow. It froze, hands stretched out, one hand holding a knife. Its legs shook like the dead black boy’s on the lawn.  I fired six times.

All that is left is black mud oozing from six bullet holes in the wall. I’m so hungry. I need to eat. Tired, sad when I should be celebrating. Why?

I can’t smell anything I cook. I sprinkle salt, pepper, and tabasco on my eggs, bacon and potatoes, but the food is bland and dry. Ten tablespoons of sugar in my coffee and it never sweetens.

I try to straighten my hair, but the comb’s teeth pull it out in clumps that fall to the bathroom floor. I splash cold water on my face and dry it with a towel, and I see a dirty imprint of my face on the cloth. I’ve washed away all my color.

I decide to go to bed, hoping sleep will get rid of my bad dream. I’ll wake up and be my old self again.

My feet float several inches off the floor. 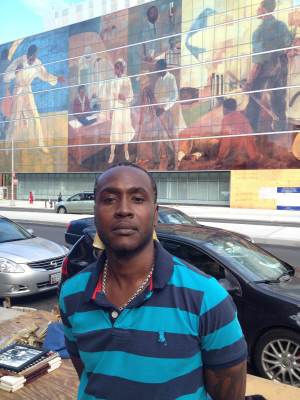 SHAWN FRAZIER completed his MFA in fiction and has also honed his craft at the Taos Writer’s Tool Box with Nancy Kress and Walter Jon Williams; the Callaloo Creative Writing Workshop at Brown University; and the University of Kansas with Kij Johnson. His story “The Hoodoo Nigger” was published by Quail Bell; “Jacob and The Owl” won the Mary Shelley Contest and was published in Rosebud Magazine, issue #57; “Nne: Mother” appeared in SQ Magazine; “What is going on with Claire?” will be published in Hidden in Plain Sight, edited by Mimi Williams.